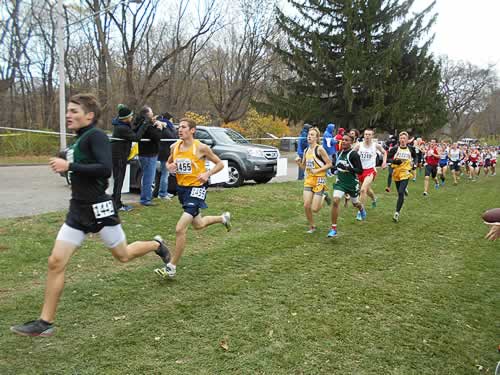 Diamnte Ugbesia (4th, in Rocket green) keeps a good pace near the one-mile mark at the IHSA Class 2A State Cross Country Meet in Peoria on Nov. 8.

Park Forest, IL-(ENEWSPF)- When he started the cross country  season in August, Rich East’s Diamonte Ugbesia, had a goal, he wanted to run in the IHSA state meet in November. He wasn’t going to let the fact that he had not run cross country before detour his dream. He came to practice every day, worked on his own afterwards, and paid attention to his coach. Add to the fact, that he is a talented runner.

"I knew if I worked hard and paid attention to coach, that I would have a good shot to make it," Ugbesia said. "I had to stay focused in practice and in the classes to have a shot. Plus the fact is I really love to run."

Well, Ugbesia won the individual Southland Athletic Conference championship in mid-October, a week later placed second out of 66 at the Class 2A regional meet in Morris; a week after that, placed 17th out of 137 runners at the Peoria East Sectional to advance to the state meet. And, at the state meet, Ugbesia ran a school-record time of 15 minutes, 31 seconds on the state course at Detweiller Park in Peoria, finishing in 48th place out of 217 runners. How competitive was that 2A final, the Top 100 runners were all under 16 minutes and the top 16 were under 15 minutes.  Along the way, this season, he placed in the top five of several competitive invites, won a triad, and placed second at others, including a second-place finish at the Morris Sectional, where he ran neck-and-neck with a runner from Lincoln-Way West, Evan Mitchell.

"He (Diamonte) just had one of those very special years that not a lot of runners have," said the Rockets long-time coach KevinKredens. "He just ran a lot of smart races. He knew when to surge and when to hold and how to stay with the lead pack. He is very coachable. That made it easy. I just gave him a mark to hit and he hit it."

Ugbesia was the first Rocket to qualify for the Class 2A State Meet, since Bryan Minnich did it in 2008, also with Kredens as coach. Ironically, both Minnich and Ugbesia, started from Box 10A at the state meet. And, Minnich drove down with his dad and brother to watch Ugbesia run.

"I had to come down and watch another Rich East Rocket who made it to state," Minnich said. "It’s something very special and I had to cheer him on. He had an amazing run."

"He had a great year, one for the record books," Kredens said. "He will remember this for the rest of his life. I will too."

The Rockets also had a runner who showed a beight future, with freshman Eric Allen.  Allen, was also an all-conference runner, finishing in 5th-place at the SAC meet, and also ran a solid 17:32 for a 29th-place finish at Regionals and a PR 16:57 for an 83rd-place finish out of 137 runners at the sectionals, but fell short of joining Ugbesia at state.

Allen also had solid top 10 performances at several invites this season and brought home his share of hardware in his freshman season. he also qualified for sectionals in his freshman year.

"Eric also had an amazing season running his school cross country for the first time," Kredens said. "He is also going to be so much faster next year, and having had success this year in doing so well at conference, regionals and sectionals, he is going to have so much confidence to go with his experience."

Kredens noted that both Ugbesia and Allen, took two minutes off their time from the first meet in September to their last meet in November. The Rockets also had solid runs from freshman Marshon Baines and  juniors Mark Diorio, Kaylon Jones, Andre Strong and Malik Jackson, whom Kredens expects will all gel in 2015, along with Allen who should lead the pack.

On the girls side, the Lady Rockets also had a good year. Senior Sarah Abbott earned all-confernce honors with a 5th-place finish at the SAC meet, and teammate Reilly Minnich (Bryan’s sister) finished 8th for another all-confernce honor. Abbott also qualified for her second sectional meet (she qualified in 2012) with a PR run of 22:20.4 and a 35th-place finish at the Morris Regionals. Unfortunately, an injury prevented Abbott from competing at this year’s Sectional meet. Dayinary Lafko, another senior, also had a good year for the Lady Rockets.