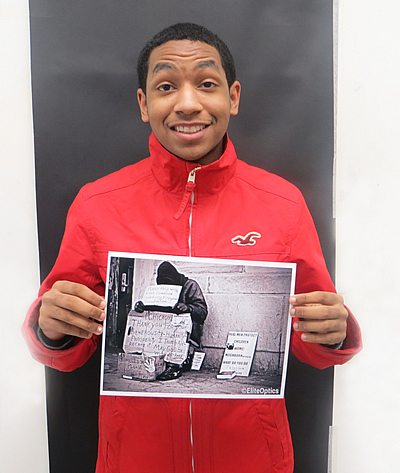 Park Forest, IL-(ENEWSPF)- Daniel Stewart, a student at Rich East High School in Park Forest, is among 104 finalists in a nationwide College and High School Photography Contest sponsored by Nikon.

Stewart, a junior and self-taught photographer, submitted his photograph which was among more than 15,000 other student photographers from across the country. His photograph was taken recently on the Michigan Avenue Bridge in downtown Chicago. Stewart said he wanted to “illustrate the overlooked people who live within our society.”

“I have a really bad memory so I take photos to commemorate moments, people and events often overlooked in life,” Stewart said.

Stewart keeps busy with his camera, serving on the Rich East Lagoon Yearbook staff, is in the art club, and is an advanced photo student.

“He also submitted three other photographs for the contest,” said Julisa Viramontes, a Rich East fine arts and studio arts teacher and yearbook advisor. “We won’t know which photo is among the 104, but this is one he is really proud of. It is really a nice honor for him. He has worked hard and continues to learn and get better.”