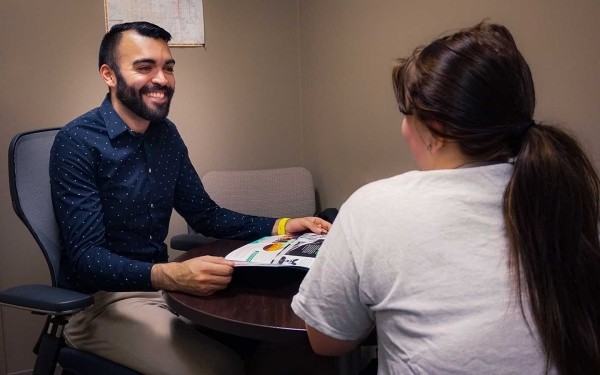 Abel Amezcua, a Roosevelt admission counselor who speaks Spanish and frequently works with prospective undocumented students and their parents

CHICAGO–(ENEWSPF)–April 17, 2017.  In a letter to Donald Trump, Roosevelt University President Ali Malekzadeh has joined more than 560 college and university presidents across the nation in signaling support for undocumented young immigrants known as “Dreamers.”

Brought to the United States as children, Dreamers have temporary permission under the Deferred Action for Childhood Arrivals (DACA) program, initiated in 2012, to stay in the United States.

An estimated 750,000 young immigrants currently are in the DACA program, and Dreamers have the support of a bi-partisan bill in Congress that would allow them to stay in the country for three more years.

“As part of its historic mission, Roosevelt University supports all Dreamers who aspire to obtain a college education,” said Malekzadeh. “Many are the first in their families to go to college, and we want them to continue to have an opportunity to achieve the dream of a college degree and success in the future.”

Since the fall of 2016, Roosevelt has offered $2,500 annual scholarships to Dreamers who are not always eligible for financial aid through the state of Illinois or the federal government because they or their parents are undocumented.

Last year, the University awarded three Dreamer scholarships. More than 40 prospective students already are in line to receive the scholarships for the 2017-18 academic year.

“We tell these students that we don’t discuss their status with anyone.  We stress to them that ‘You are protected and you have rights,’” said Abel Amezcua, a Roosevelt admission counselor who speaks Spanish and frequently works with prospective undocumented students and their parents.

For more information on the Dreamer Scholarship Program, as well as other scholarship opportunities that may be available to Dreamers, contact Roosevelt’s Office of Admission at [email protected].