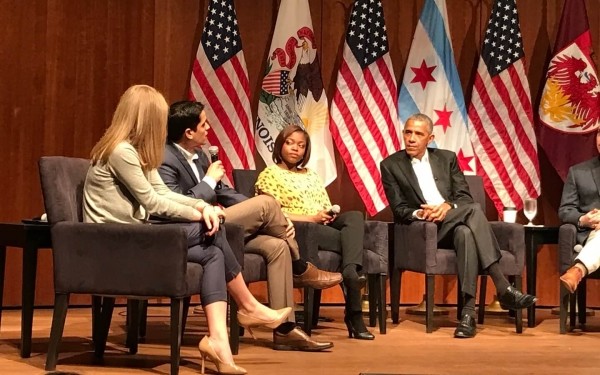 CHICAGO–(ENEWSPF)–April 27, 2017. Roosevelt University senior Ramuel Figueroa received an early graduation gift in April when he took part in a “Conversation on Civic Engagement” at the University of Chicago with former President Barack Obama.

It was a rare opportunity for the military veteran just days before his graduation on May 5 from Roosevelt University.

“I’m grateful and feel very lucky to have been chosen for this panel discussion,” said the Roosevelt honors student who first shared his story last fall with the Roosevelt Review.

“When I was interviewed by Obama’s people about being on the panel, they knew about the article and everything in it,” said Figueroa. “It was the driving factor for my being considered.”

Just as he had done previously with Roosevelt Review, Figueroa credited his ability to adapt to non-military life and University coursework demands on college preparation training he received from Veterans Upward Bound at Roosevelt University.

He also discussed his experiences as a student researcher with Roosevelt’s Policy Research Collaborative (PRC), telling Obama about the difficulties he has had since Donald Trump’s election in getting Chicago day laborers, many who are immigrants, to open up about their situations.

“I told him (Obama) that I went to the street corners with a community organizer from Latino Union of Chicago.  We talked with these workers before and after the election, and it was getting frustrating,” said Figueroa. “It’s become much more difficult to get information from these temporary workers since the election.”

Obama suggested it might be time for the Roosevelt student to “put away the clipboard” and focus on continuing “to build trust in the community.”

“It was an incredible experience. He (Obama) was telling me about what it was like to work with different people during his community organizing days on Chicago’s south side and I was sharing with him my concerns that these are going to be very trying times for people from marginalized areas,” Figueroa said.

The Roosevelt student did his honors thesis entitled “Wage Thefts and Occurrences of Work Injuries among Day Laborers,” presenting his findings at   Honors Research Day, a symposium for the Roosevelt community held on April 28.

Figueroa also was the lead student researcher for an ongoing study on the same topic, which is being conducted by PRC in collaboration with Latino Union of Chicago.

Based on his experience with the project, Figueroa told Obama that activists need to be able to “connect personal problems to policy issues…If you’re working two jobs and can’t afford day care, it’s not because you’re lazy.”

Julie Hilvers, director of the PRC, was among a group of more than 20 Roosevelt students, faculty members and administrators in an audience of approximately 300 people at the 90-minute event.

“Ramuel and all of the young people on stage with Obama, as well as other young leaders in the audience, have been doing incredible work that has the potential to create positive change in our schools and communities, our city, and beyond,” she said.

“Our research project with Latino Union of Chicago never would have happened without Ramuel, and I am thrilled he had this incredible opportunity and is getting the credit he deserves for the work,” Hilvers said.

Roosevelt senior Brittany Austin, who is vice president of the Black Student Union, said the chance to see Obama was “life changing” and that it definitely was a day for her and others at Roosevelt to be proud of the University. “Ramuel represented the University so well.  I really look forward to seeing where he goes from here with his research,” she said.

Until now, Figueroa’s journey has involved entering the military directly out of high school, and enrolling in college as soon as his U.S. Army service as a cavalry scout for reconnaissance missions was over.

“The opportunity to take part in a conversation with Obama came at a moment when I am transitioning out of being a student and am entering the real world,” said Figueroa, who is planning to attend law school next fall.

“This experience taught me how important it is to remain politically engaged, even when the system seems broken and you just want to run away,” he said. “It showed me that you have to be willing to work with other people.  Even if there’s a disagreement, it doesn’t mean we can’t work together.”

Several law schools already have accepted Figueroa, and he will spend the coming months exploring additional opportunities at law schools around the country.

A previous Roosevelt Review story about Figueroa can be found here.