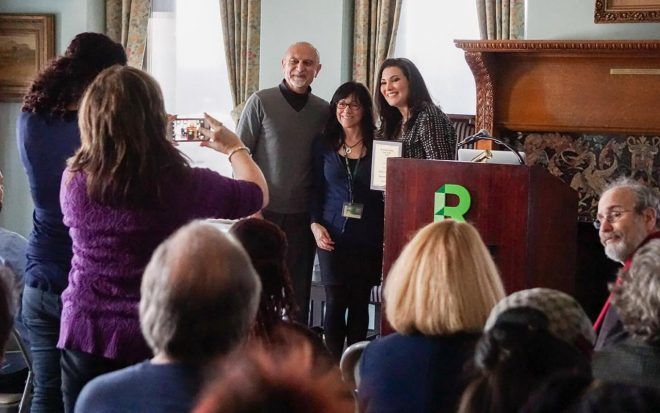 CHICAGO–(ENEWSPF)–February 20, 2017.  There are times in life when becoming involved and making change for the greater good become imperative.

That moment came for 32-year-old Roosevelt University student Jessica “Jessy” Santini on March 6, 2015 when Santini’s younger brother, Mikey Santini, who was also a Roosevelt student, died of a heroin overdose at age 26.

“I knew I had to try to help people understand what’s involved with addiction,” said Santini, who is the 2017 winner of Roosevelt’s coveted Matthew Freeman Social Justice Award. “I couldn’t let my brother die in vain.”

A Buffalo Grove resident and full-time student at Roosevelt’s Schaumburg Campus, Santini has worked tirelessly as a volunteer since her brother’s death, sharing her story of loss and mentoring with high school students and families in the Northwest suburbs.

A senior in Roosevelt’s psychology program, Santini currently is studying Applied Behavior Analysis (ABA), learning principles aimed at social behavior change, which she has been using to treat children who have been diagnosed with Autism Spectrum Disorder.

As a volunteer with the Palatine, Ill.-based not-for-profit group Live4Lali, Santini regularly speaks to young people and their families about the realities of addiction, which in her brother’s case included multiple overdoses and attempts at rehabilitation.

“Jessy is one of the bravest and most humble people I know,” said Chelsea Laliberte, a 2007 Roosevelt University graduate who started Live4Lali after her own brother died of a heroin overdose in 2008. “She’s someone who dives into helping people by telling her story, and she’s been a critical part of our network, caregiving and advocacy work.” Santini and her family hold a golf outing called Mikey’s Message that annually raises thousands of dollars for Live4Lali.

The Roosevelt student also works part-time as an ABA therapist and registered behavior technician for Impacting Autism, LLC of Inverness, Ill., where she works under the supervision of Jessica Latshaw, MA, BCBA, conducting in home therapy for children diagnosed with Autism Spectrum Disorder.

“Jessy regularly works one-on-one in home with our kids, helping them learn to communicate, socialize, and reach their full potential,” said company owner Dianna Poulos, MA, BCBA. “She’s one of the most caring therapists I’ve known. She puts her whole heart into everything she does for our kids.”

After she graduates in May, Santini hopes to get a master’s degree in Counseling or in Applied Behavior Analysis. “I’m humbled to be recognized for my work,” said Santini, who accepted Roosevelt’s pre-eminent social justice award on Monday, Feb. 6, during the university’s annual Matthew Freeman lecture. “I try to carry out social justice every day in my life, but I never expected to be called out for it. I just follow my heart,” she said.