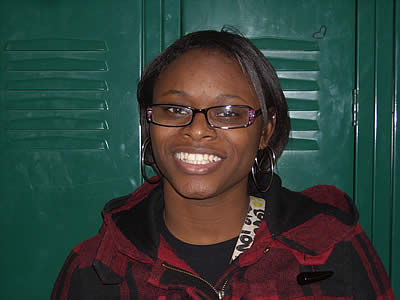 Park Forest, IL–(ENEWSPF)- eNews Park Forest continues with our series of stellar students from Rich East High School. Mr. Kevin Kredens, the school’s publicity liaison, provides each student a series of the same questions. All responses are in the students’ exact words, except for minor editing for content and space when needed.

We are pleased to feature Sade Gant, a life-long resident of Park Forest who appreciates that Rich East Principal Mark Kramer is "always among the students," and enjoys physics and psychology classes because "they force me to think about the problem/question in order to come up with the correct answer."

What do you like the most about Rich East? I like the fact that our principal (Mr. Mark Kramer) is always among the students (my freshman year, I couldn’t even tell you who the principal was). He (Kramer) actually listens to us and tries to solve our problems for the most part. You will always hear him sometime during the day. We may hate it, but at least he’s there.

Favorite classes and why? My favorite classes are physics and psychology because in many ways they force me to think about the problem/question in order to come up with the correct answer.

Areas met or exceeded on PSAE.  Met all areas exceeded in mathematics.

AP Exams. I have not taken an AP exam yet but I play on taking it in May for physics.

Favorite TV Shows. My favorite TV shows are, “The Game,” and “RuPaul’s Drag Race.” I’ll occasionally watch “How to Rock,” “Degrassi,” and “Shake it Up.”

Places that you’d most like to visit. I would really like to visit Puerto Rico, Mexico and Hollywood. I know at one point in my life, I will eventually visit one of those places.

Clubs, hobbies, community/church. Special volunteering in community.  I am in READY Youth Ministry at church, and I work at two police-sponsored sports-related summer camps called PAAC and PCSC.

College choice/Major: I want to go to North Central College in Naperville to run track and dance. I also want to major in Physics so I can teach and coach at a high school.

Where do you want to be in five years/In ten years? In the next five years, I would like to have graduated from North Central College with a degree in physics education and a minor in dance. Then I want to enlist in the U.S. Navy and serve my country. Finally, after that, I want to come back and become a teacher and coach. I want to take all my experiences from college and the Navy and help teenagers become better people and discover who they are.