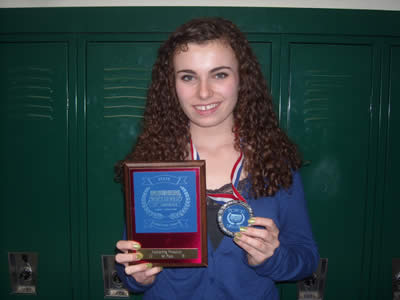 Park Forest, IL-(ENEWSPF)- Rich East sophomore Sarah Abbott last weekend won the Illinois Business Professionals of America State Championship in Keyboarding Production at the BPA State Meet in Oak Brook. In doing so, Abbott also qualified for the BPA Nationals which will be held in Orlando, Fla., in May.

Abbott defeated students from more than 100 schools in the competition.

“It feels good to have won. I’m honored to go to nationals,” Abbott said.

Abbott also competed in legal office procedures and financial math, but did not place among the top 10 necessary to advance to nationals. She was, however, among the top 20 in those two events.

“They all did pretty well,” Frederick said. “The competition is very  intense. All of them will be back next year, and they have this experience. They know more of what to expect and next year will be even better as they continue to study and practice.”