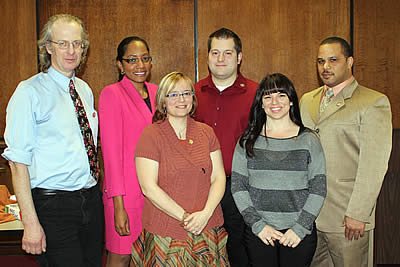 Professor Kathleen Malic, chair/coordinator of the nursing program at PSC, says that to be inducted, a student must maintain an 86% or better in all of the core nursing courses. “The induction ceremony is a celebration of their hard work and professional potential,” she added.

The PSC Nursing Honor Society had its first induction ceremony in 2000. In spring 2011, PSC became the Alpha Chapter of the Illinois Organization of Associate Degree Nurses (I-OADN) Alpha Delta Nu Honor Society, and in fall 2012 was named the Alpha Chapter of the National Organization of Associate Degree Nurses (N-OADN) Alpha Delta Nu Honor Society. More than 100 students have been inducted into the honor society since it was established.

The objective of the N-OADN Alpha Delta Nu Nursing Honor Society is to recognize the academic excellence of students in the study of Associate Degree Nursing. The society encourages the pursuit of advance degrees in the profession of nursing, as well as continuing education as a life-long professional responsibility. The society also participates in the recruitment of qualified individuals into the profession of nursing.

“We are proud of the national status that our honor society has attained. We are the Alpha Chapter of the National Organization of Associate Degree Nursing Alpha Delta Nu Nursing Honor Society and there are now over 30 chapters nationwide.  It all began here at PSC,” Malic said.