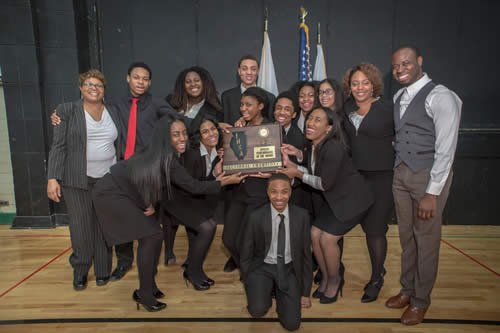 Takiyah Brown, a 15-year-old sophomore from Richton Park, is the student director of the Southland Performance in the Round team.

Other first place winners in the Southwest Suburban Speech Forensics Sectional are:

Delarah Wright, 17, a senior from Matteson, for Humorous Interpretation;

Erik Thomas, 18, a senior from Matteson and Janessa Colquitt, 16, a junior from Country Club Hills for Dramatic Duet Acting;

“The performance of our Southland College Prep students clearly demonstrates that Speech and Forensics are truly a center of excellence at this school. Their talented and dedicated coach, Ms. Cheryl Frazier, Director of Forensics and Theater, together with her coaching team have prepared our students well. We look forward to keen competition in the State finals in Peoria which will draw some 700 students from 70 high schools around the state,” said Dr. Blondean Davis, CEO of Southland College Prep.