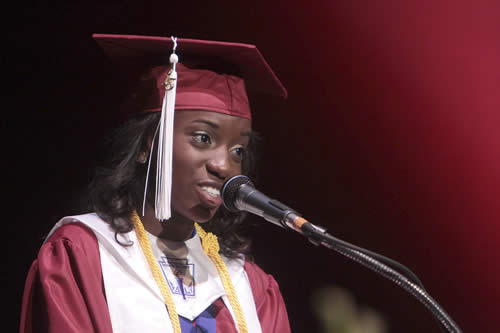 Chicago, IL-(ENEWSPF)- Become an observer, look at the universe around you instead of focusing on your digital devices, Dr. Mae Jemison, a former NASA astronaut and the first African-American woman to fly into space when she was aboard Space Shuttle Endeavour on a Spacelab mission in 1992, told Southland College Prep Charter High School graduates in commencement ceremonies at Harris Theater Millennium Park Chicago, May 22.

Jemison, a Morgan Park High School graduate who now leads 100 Year Starship, an initiative seed-funded by the U.S. Department of Defense designed to assure capability for human interstellar space travel within the next 100 years, told the 109 members of the new public charter high school’s second commencement class that their potential was unlimited and to enjoy and relish their college careers.

Dr. Blondean Y. Davis, Southland’s CEO, reported that every member of Southland’s class of 2015 has been accepted to college, including such top U.S. institutions as Duke, Georgia Tech, Illinois Institute of Technology, University of Notre Dame, University of Chicago, Vanderbilt, Washington University and Yale University. Together, Dr. Davis said, “ the class was offered $ 13.2 million in merit scholarships.”

Victor Banjoko, 18, of Country Club Hills, Illinois, earned $ 1.3 million in merit scholarships and plans to pursue a dual degree program at Morehouse College and George Tech where he will major in physics and engineering.  He hopes to become an orthopedic surgeon and work in Nigeria, his family’s country of origin. During the Commencement it was announced that Banjoko also earned the Ronald Blackstone Memorial Scholarship award. A National Honor Society member, Banjoko was the bowling team’s 2015 MVP.

Amy Kwarteng, 18, of Matteson, Illinois, led the class with a 4.71 GPA and was Valedictorian. She earned more than $ 720,000 in merit scholarships and plans to study psychology or cognitive science at Yale University . A National Honor Society member, Kwarteng was a member of Southland’s dance group and an MVP cheerleader.