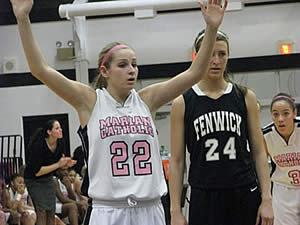 Chicago Heights, IL–(ENEWSPF)– Seniors Jasmine Matthews and Simone Law (13 rebounds, five blocks) each scored 21 points to ignite host Marian Catholic to a 53-43 victory over rival Fenwick on Friday night. The Friars cut a nine-point fourth-quarter deficit to three before Matthews took over to secure the victory.

The win gives Marian (26-4, 9-0) the outright East Suburban Catholic Conference title, marking the first time in its ESCC history (17 years) that Fenwick has not won or shared the title.

Sophomores: Marian (19-0) completed a perfect campaign and ESCC championship with a 51-28 victory over the Friars.

Freshmen: The Spartans improved to 10-4 with a 40-36 trimming of Nazareth.