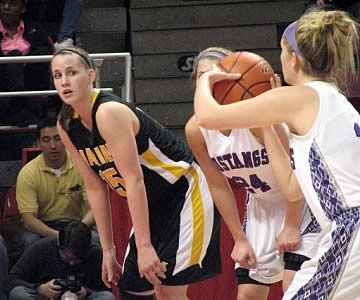 Normal, IL-(ENEWSPF)- The third time was the charm.

With three shots at the basket in the final 10 seconds, Kauai Bradley banked in the third attempt as the buzzer sounded on March 2 at Redbird Arena to give Marian Catholic a 48-47 victory over Rolling Meadows for the IHSA Class 4A state championship.

The Spartans (33-1) improved to 1-1 in title-game contests and avenged their lone blemish of the season.

Spartan Coach Annie Burns has compiled a record of 216 wins and only 51 losses during her 8-year tenure at Marian Catholic.

Jenny Vliet put Rolling Meadows ahead at 47-46 with 25 seconds left in the 4th quarter. 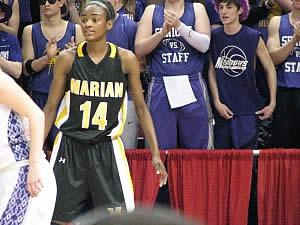 Marian’s Kauai Bradley scored at the buzzer to give MC a 48-47 title-game win over Rolling Meadows. (PHOTO SUPPLIED)

At 17 seconds to go in the game, Marian’s Teniya Page missed a jumper. After a team time out at 11 seconds, Teniya Page again put one up with 5 seconds remaining. Megan Walsh captured the rebound and shot with 1 second remaining. Like lightening, Spartan Kauai Bradley took the rebound, still with 1 second officially on the clock, and took the final shot of the game for the win and state title.

The official time noted for Bradley’s winning shot is 00:00 at the IHSA’s results page.

The Spartan girls captured the third IHSA state title in school history, joining football (1993 4A) and baseball (2012 3A).