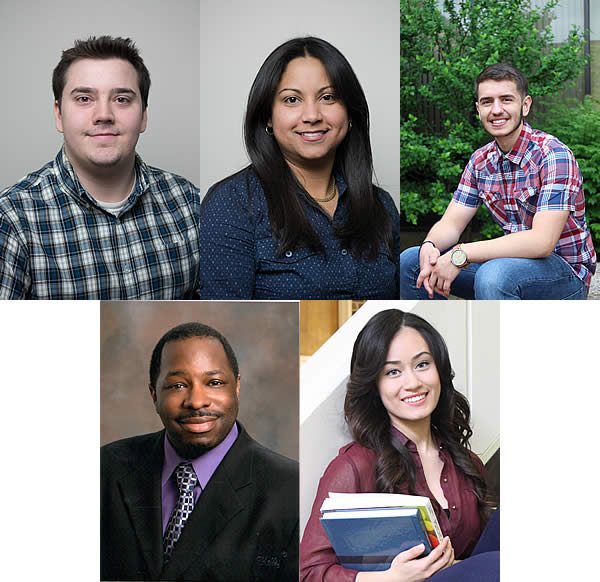 Chicago Heights, IL-(ENEWSPF)- Four graduating students and one alumna of PSC are receiving special recognition during the 56th Annual Commencement on May 16, 2015.

Zachary R. Einert of Chicago Heights and Sheila D. Porrata of Sauk Village are being recognized for their outstanding academic achievement, campus leadership, and responsible community involvement with Phi Theta Kappa (PTK) honors. They were selected by committee from a group of PSC student applicants. As part of the honor, Einert and Porrata are named to the 2015 All-Illinois Academic Team for PTK.

Lotfi El Jai of Olympia Fields, Celeste Garcia of Crete, and DaRon T. Johnson and Emmanuel Lopez of Glenwood also are being recognized during the commencement ceremonies as President’s Leadership Award recipients. The annual award recognizes one or more graduating students who have maintained high academic standing, made significant leadership contributions to the college and demonstrated the values of responsible citizenship.

Einert is a member of the Nu Sigma Chapter of PTK and is a calculus workshop instructor and chemistry and mathematics tutor at PSC. He also volunteered for the annual Foundation special event, assisting with the silent auctions and setting up the facility. He assisted with the fundraising, set up, and logistics of the annual PSC Walk of Hope. He is a 2014 recipient of the STEM Hall of Honor award and a three-time PSC Trustee Scholarship recipient. Einert is graduating summa cum laude with an Associate in General Studies degree, and has been accepted to the University of Illinois at Chicago School of Engineering.

Porrata is the Service Committee chair for the Nu Sigma Chapter of PTK. As a student at PSC, she helped coordinate the 2014 Phi Theta Kappa Veterans’ Appreciation Dinner for PSC Students. She also helped organize the Non Perishable Food Drive Challenge on campus, which collected 688 cans for a local food pantry. She tutors mathematics, chemistry, and Spanish at PSC, and has been on the Dean’s List and STEM Hall of Honor throughout her time on campus. Porrata is a recipient of the Illinois Community College Faculty Association Scholarship. She has an Associate in Science degree from PSC and plans to attend Purdue University Calumet to study nursing.

El Jai is a member of the tennis team at PSC. He played third singles for the squad, and won his bracket in a regional tournament. He also is a member of the Nu Sigma Chapter of PTK and a member of the Alpha Beta Gamma international business honor society. An immigrant from Morocco, El Jai recently participated in a panel at the International Tea sponsored by the Student Government Association (SGA) to talk about his experience growing up in Morocco and how his life has changed since coming to Chicago Heights. A member of the Dean’s List, he is graduating magna cum laude with an Associate in Arts degree, and plans to transfer to a four-year university to study business.

Garcia is the outgoing president of the All Latin Alliance (ALA), captain of the 2014 Women’s Volleyball team, vice president of the SGA and a Peer-Led Team Learning leader in chemistry. She also is a member of the Nu Sigma chapter of PTK. As a student athlete, she has been awarded Most Improved and Second Team All-Conference, All Tournament, First Team All-Conference, and Most Valuable Player. At the 2015 STEM Skyway Poster Competition hosted at PSC, her team placed third overall in the biology division out of 11 contestants. She is graduating cum laude with an Associate in Science degree, and plans to attend a four-year university and eventually obtain a Ph.D. in pharmacology, specializing in cancer research.

Johnson is the outgoing student trustee for the PSC Board of Trustees and the Illinois Community College Board Student Advisory Committee’s representative for the Illinois Community College Board Financial Advisory Committee. He is a volunteer tutor in Spanish, business, and accounting. He also is former president of the Protégé Club and Alpha Beta Gamma, and a member of the Drama Club, with whom he acted in the play “The Marriage Counselor,” as well as a member of the Photo Society, Student Veterans Club, and Phi Theta Kappa. A member of the Dean’s List, Johnson is graduating cum laude with an Associate in Arts degree, and plans to attend DePaul University to study business.

Lopez is the 2014-2015 president of the SGA at PSC. He also is former vice president and a member of ALA and former president and a member of the Sustainability Club. He  Lopez helped institute a ‘Shadowing Program’ at PSC, by which students who are interested in becoming student leaders can get first-hand experience on what to expect if they are successful. At the 2015 STEM Skyway Poster Competition, his team placed third overall in the biology division out of 11 contestants. He is graduating cum laude with an Associate in Science degree and plans to transfer to a four-year university to study biology.

More than 450 students will graduate from PSC with associate degrees and certificates, and more than 300 graduates will participate in the ceremony at11 a.m. on May 16 in the Pioneer Fieldhouse. Illinois Sen. Toi Hutchinson will address the graduates. For more information about PSC’s commencement ceremony, contact the Office of Student Affairs at (708) 709-3507.