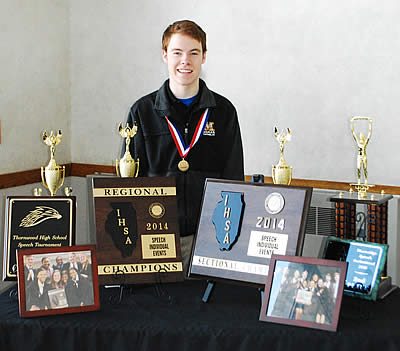 Chicago Heights, IL-(ENEWSPF)- The Marian Catholic Speech team competed this weekend at the Peoria Civic Center with a list of nearly 40 different schools across the state of Illinois to try and claim the crown of State Champion. After triumphing as champions at both their Regional and Sectional sites the Spartans had their eyes set on the State Championship.

Marian was well represented with having 9 of the 15 categories involving a Marian Speech member. Many team members performed very well in every one of the events. “I’m very proud of the entire team and the accomplishments they achieved throughout the year,” said Marian Speech Director Mark Donaway. “Regional and Sectional champions are great honors, they (Marian Speech members) have a lot to be proud of.”

Of the 9 representatives, Cooper Packard claimed a state title in Special Occasion Speaking. “After finishing in 2nd last year, I had my sights set on only one thing and that was being a state champion,” said Packard. “The amount of attention and greetings I received was greatly appreciated, I didn’t really expect that.”  Cooper received multiple first place votes in the preliminary rounds before saving his best act for the finals and receiving the honor of State Champion. Other notable accomplishments included Emerson Pavur and Regina Hoyles as they placed sixth in Dramatic Duet Acting.

The Marian Catholic Speech team members will now continue to prepare for upcoming events and competitions. Group Interpretation Sectionals will take place Saturday March 22 at Thornton High School in Harvey. The Spartans will also be getting ready for Marian Catholic’s well renowned musical performance. This year’s performance will be “Shrek” and will be held at Marian Catholic High School Tuesday April 8th through Sunday April 13th.