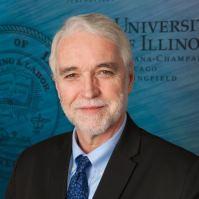 SPRINGFIELD, IL (ENEWSPF)–February 3, 2017– The State of Illinois and University of Illinois System announced a new partnership today which advances Illinois as the nation’s premier ‘Smart State’, integrating next-generation technology to improve quality of life, grow the state’s economy and retain and attract residents.

“Illinois is nationally recognized as the first U.S. state to have a vision and roadmap for becoming a smarter state,” said Hardik Bhatt, Secretary Designate and state CIO of the Department of Innovation and Technology. “The goal is to use technology, Internet of Things, mobile, analytics and cybersecurity to improve operational efficiency and find new and more cost-effective ways to serve our customers.”

Illinois launched Smart State initiatives, under the leadership of Governor Bruce Rauner, with the release of a white paper titled, “Introducing the Smart State: Illinois Leads the Way” in early 2016.  This was followed by two smart state workshops in April and December, that connected leaders from both the public and private sector, to explore how becoming a smart state will improve government efficiency and access to services, and create a climate that promotes the growth of business and industry.

U of I President Tim Killeen commented, “This partnership will capitalize on the U of I System’s world-class faculty and its state-of-the-art research facilities to serve our citizens, lift our state’s economy and make Illinois a place where the world turns for the pioneering innovation that fosters success in the 21st century.”

The first phase of the new agreement between the state and the U of I System will partner the Illinois Department of Innovation and Technology (DoIT) with the National Center for Supercomputing Applications (NCSA) at the University of Illinois at Urbana-Champaign, where world-renowned staff and leading-edge computing systems will help tackle large-scale data analytics and cybersecurity issues to accelerate innovation and safeguard citizens.

“The Smart State initiative will support Illinois residents and the state’s economy at a variety of levels,” said Michael Hites, the U of I System’s chief information officer and senior associate vice president for Administrative Information Technology Services.

As an example, Hites said this initiative can utilize big data technology to improve state efficiency and make it easier for citizens to work with the state, creating a “one stop” point of entry for services – from child-care benefits and motor vehicle registration to professional licensing and setting up new businesses.

“A partnership between DoIT and NCSA will bring great benefits to Illinois businesses and citizens in the area of cybersecurity,” commented Kirk Lonbom, DoIT’s Chief Information Security Officer. “The threat posed by cyber attackers grows exponentially by the day and collaborations such as these accelerate the pace of cybersecurity progress.”

State and University officials will meet soon to discuss future agreements that would expand partnerships across the U of I System to foster innovation that promises to create new economy-building work processes, services and products.