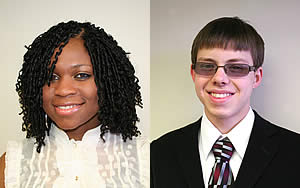 Community college presidents or their designated nominators may submit no more than two nominations per campus for this award. An independent panel of judges considers outstanding academic rigor, grade point average, academic and leadership awards, and engagement in college and community service in the selection process.

Phi Theta Kappa Honor Society, headquartered in Jackson, Mississippi, is the largest honor society in American higher education with 1,270 chapters on college campuses in all 50 of the United States, Canada, Germany, the Republic of Palau, the Republic of the Marshall Islands, the Federated States of Micronesia, the British Virgin Islands, the United Arab Emirates and U.S. territorial possessions. More than 2.5 million students have been inducted since its founding in 1918, with approximately 125,000 students inducted annually.