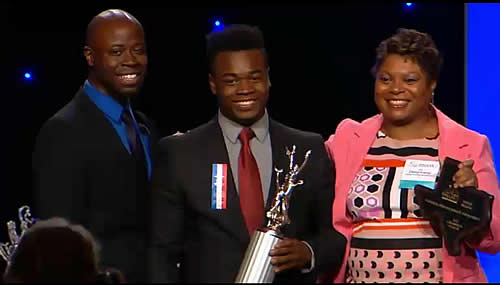 Erik Thomas, 18, of Matteson, is the national champion in Poetry Reading at the tournament that drew hundreds of competitors from schools across the U.S. He performed “Kong,” a poem by Pamela Sneed.

Charnnia Jones, 18, of Richton Park, placed third in the national tournament’s Prose section for her reading of,  “ While the World Watched,” by Carolyn Maull McKinstry.

Dr. Blondean Davis, Southland’s CEO, noted, “These are tremendous accomplishments by members of a brand new school’s speech and forensics team. These honors are a wonderful demonstration that Southland’s students can accomplish most anything if given an opportunity. There is absolutely nothing that our students cannot do.”

Thomas’ selection, “Kong,” draws on the capture of King Kong depicted in the 2008 remake of the film classic and the kidnapping of an African man from his homeland as dual metaphors for a universal call for freedom.by Sneed’s two trips to Ghana, West Africa, KONG uses by Sneed’s two trips to Thomas, who graduated from Southland College Prep last month, will enter the University of Illinois Urbana-Champaign in the fall where he will study theater.

According to Ms. Cheryl Frazier, .Director of Forensics and Theater at Southland College Prep, “Erik Thomas joined Southland’s speech team in his junior year, yet went on to be named the ‘outstanding speech student of 2015.’ Earlier this year, he took second place in the Illinois High School Association (IHSA) 2015 state completion in Poetry reading and was the first place champion in the same event in the Southwest Suburban Sectional tournament.

Jones’ prose selection is a memorable autobiographical account by the author when she was a 14-year-old child who survived the 1963 bombing of the Sixteenth Street Baptist Church’s Sunday school in Birmingham, Alabama.

Jones, who plans to study theater at Indiana State University in the fall, performed in “The Invisible Soldiers, “an original dramatic piece that the Southland Speech team staged during a previous IHSA Performance in the Round competition.

“Considering that this is only the fifth year of Southland College Prep’s existence and our speech program is only four years old, to win top honors in this national competition is phenomenal. And, to have two of our students place nationally among a strong field of competitors from large and more established schools from around the U.S. is even more impressive,” said Frazier.

Both Thomas and Jones faced more than 350 competitors in each of the tournament’s sections in which they competed, she added.

Thomas and Jones were among 20 finalists in a field of 700 students to compete in the August Wilson Monologue Competition Chicago finals held at the Goodman Theater earlier this year.