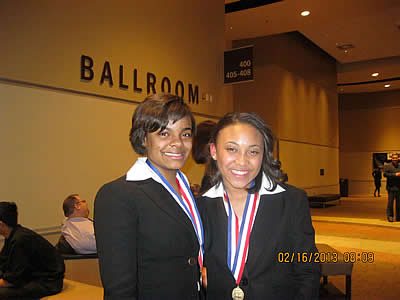 “We’re quite proud of our team’s performance in this individual Speech event, for during this two-day tournament these Southland juniors competed against a very talented field of experienced performers from Hinsdale Central, Wheaton North, Shepard, Marian and Harrisburg high schools,” said Cheryl Frazier, Southland’s Director of Forensics and Theatre.

Earlier this month, the duet, who performed a piece entitled, “Saturday Night/ Sunday Morning,” took first place in the Dramatic Duet Acting Section of the State Regional tournament held at Southland College Prep and then placed second in the Sectional tournament at Reavis High School, Burbank, which sent them to the IHSA State finals this weekend.

In addition, Morgan Brown also placed second in the Oratorical Declamation event of the IHSA Regional Speech competition for her interpretation of “A Case of Severe Bias” and Alexus Newsom placed third in Prose Reading for “While the World Watched” in the Regional event.

Click here for official results of the IHSA Speech Individual Events State Finals in Peoria which drew more than 700 students representing some 70 high school speech and forensics teams from throughout Illinois who competed in 15 events during the two-day tournament.

Southland College Prep opened in August, 2010. It is the only public charter high school in Chicago’s suburbs.  The new school is designed to prepare all of its graduates for academic success in college.

Southland’s students use 21st century classroom tools including an electronic portfolio of work and a blog for each subject area. Students engage in technology-based collaborative learning with other students, have access to video conferencing and technology assisted home-school communication to keep parents informed of progress.