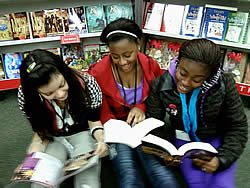 Rich East students (from left) Reyna Santiago, Melanie Grey and Ashauneti Watts dig into a few of the many books that were available to students and staff through the Scholastic Book Fair at the school in November. (PHOTO SUPPLIED)

Park Forest, IL–(ENEWSPF)– Rich East High School has been named among the nation’s best high schools, according to the prestigious US News & World Report magazine.

Rich East received the Bronze Medal through a host of criteria measurements instituted by the magazine. The gold medal went to the top 100 schools. The silver medal went to the next 461 rated schools. The Bronze went to 1,148 other schools that were ranked from the top three tiers from the rest of the nation. In all, there were 21,786 public high schools evaluated with sufficient data to measure.

The gold and silver medalists took up the top 97.9 percentile rankings with the bronze medalists ranking from 91.9% to 97.6% in the nation.

“This is a high credit to our students, our community and our staff,” said Rich East principal, Mark Kramer. “Any placement at this level is a great achievement. {Even} if Rich East finished at the bottom of the bronze medal rankings, it finished 91.9% in the nation, or at best, finished in the top 97.6% of high schools in America.

“At this time, I am not certain where we finished among other bronze medalists, but am proud of our finish at either extreme,” Kramer added.

The criteria is complicated and is derived from a three-step process which includes proficiency standards in reading and math and an assessment on how well schools prepare students for college-level work. Schools were evaluated on how effectively they prepared their least-advantaged students (black, Hispanic, and low income) against the average for similar students in the state. Rich East has performed well in this area for some time. The final criteria was based on AP testing and compared on a “college readiness index” administered by US News & World Report.

Over the past two years, Rich East Rockets’ test scores have doubled in both reading and math, finishing with 60.2 percent and 55.1 percent respectively, which equates to a growth rate of 106 percent in each content area in the Economically Disadvantaged category.

“This supports our belief that all children can learn and we are a living example of that here at Rich East High School,” said Kramer.

Rich East has been recognized by the Illinois State Board of Education as a leader in student achievement growth and was asked to provide seminars to other schools that want to emulate the success it has been having.

Kramer said he encourages all parents, students and members of the community to get involved and help Rich East students reach the ultimate goal of meeting Adequate Yearly Progress (AYP), which this year will be 77.5 percent.

“When we make AYP this year, we might very well reach the silver or gold status for next year,” he concluded this is not the goal of student achievement, it sure feels better than NOT being recognized as a leading high school in America.”