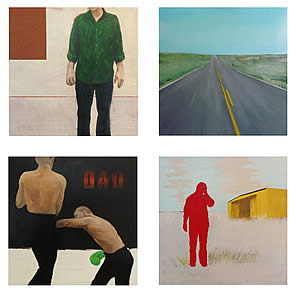 “The Secret Life of Men” by Sioban Lombardi of Chicago. (PHOTO SUPPLIED)

University Park, IL–(ENEWSPF)– The Governors State University Visual Arts Gallery will host “Regard – Resist – React,” a major exhibit of artists’ creative reactions to the issues that affect them personally, emotionally, and/or intellectually.

The exhibit runs from March 4 through 25 with an opening reception on Saturday, March 5, from 4:30 to 7:30 p.m. The exhibit and reception are free and open to the public.

“One of our goals for this exhibit is to give artists and the public an opportunity for discourse around otherwise avoided issues like war, politics, religion, immigration, and sex,” said Jeff Stevenson, Gallery Director and co-curator of the exhibit with Susan Aurinko. Stevenson is also a university lecturer in the GSU art department. “We hope the show will tour to other campuses and venues when it leaves GSU.”

Artists contributing work to this exhibit are some of the most prominent developing voices in the artistic world. Most of the artists are based in Chicago but draw from international roots and influences.

Chief among the exhibitors is Wafaa Bilal, Iraqi born artist noted for his unique forms of expression. His video “4th of July” will be shown at the exhibit.

Bilal is assistant arts professor at New York University’s Tisch School of the Arts. He has a camera mounted in the back of his head, capturing images of where he has been. Bilal uses the images in his art to illustrate what has past. He also has an intricate tattoo on his back honoring the U.S. and Iraqi war dead.

Roland Oria, Jennifer Traff, and Monica Wulfers. Sioban Lombardi of Chicago will exhibit an installation of

The Visual Arts Gallery is open Monday and Wednesday, from 11 a.m. to 4 p.m., and Tuesday and Thursday, from noon to 9 p.m. or by appointment. It is located adjacent to E Lounge, Governors State University, 1 University Parkway, University Park, Illinois.