Sitting Down With Crescent Muhammad 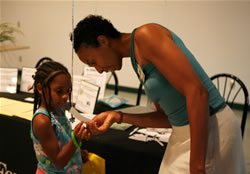 Park Forest, IL—(ENEWSPF)— Crescent Muhammad recognizes that she has big shoes to fill taking over the position previously held by Barbara Moore, but is optimistic about in her new position as Community Relations Coordinator. Muhammad started took over a little more than 5 weeks ago, and seems to have settled in rather quickly. She comes to Park Forest with a Bachelor of Arts in Economics from New Mexico State University, and has two semesters remaining on a Masters in Public Administration from Governors State University. She has two children, four year old son Nasir, and 10 month old daughter, Phyre.

Crescent grew up in Harvey, IL, and has family living in Matteson. She moved to Park Forest about 3 months ago, and starts her story there, “I am new Park Forest resident, and a new member of the Village staff.  I say that because in my position as Community Relations Coordinator, everything that I’m doing is beneficial to the residents of Park Forest, which includes me.  Some of the interests that residents may have, or concerns, I can relate to a lot better being in the community and noticing things on my own – and sometimes I can pre-empt a concern that another resident may have, who may not feel as comfortable to bring it to the forefront.”

She says she enjoys the spirit of the Village, “I like Park Forest.  I moved to Park Forest for accessibility.  My family is in Matteson.  I wanted to be close to them, but I wanted to be able to get to where I need to.  I moved in just before the grocery store closed.  So, I had everything within walking distance: a movie theater, the doctor’s office, the library, the pool, which is ideal for me.  I spent about 6 years in New Mexico [in school], and it was just about the same.  Everything was in walking distance.”

“I think being out in your community and just being able to walk and enjoy what your community has to offer really adds to your quality of life.  I think that’s a good point of Park Forest.”

While her undergraduate degree is in Economics, she speaks of a strong interest in international development.  “My minor is in government, so I’ve always had an interest in public administration with regard to how governments develop, and develop their economies and their community base.  From there, a lot of my work was with community organizations, and an emphasis on community development.”

Muhammad most recently worked with Teen Living Programs, a not-for-profit organization that works with homeless youth. She was attracted to the organization because it provides more than a "temporary fix" for youth in need, “Basically the organization helps youth who are homeless.  They provide housing.  They also provide a comprehensive training program for the youth which includes life skills, money management, health and nutrition.”

“One of the reasons they stand out is that it’s not a temporary fix for the youth.  It’s not, ‘You can sleep here,’ and next week you don’t know how you’re going to eat.  It’s investing in the community in the sense that once these youth leave the program, they can feed themselves, they can clothe themselves, and they can refer other youth to the program.”  She says the main focus of Teen Living Programs was providing youth with opportunity. 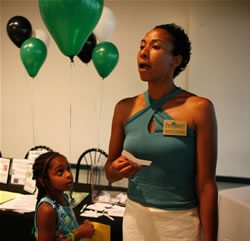 So why take a job in Park Forest? “I think Park Forest has so much potential that a lot of people don’t realize.  Park Forest was not a premier suburb just because someone decided for it to be.  It had a lot of components that were valued at that time, and I see will be valued again.  A lot of the developments in the Real Estate market in the Chicago area as a whole are directing people to find other options for housing for communities that they previously didn’t look at or previously weren’t concerned with.  So, I think Park Forest has a lot of potential to cash in on some of those changes.”

She sees her role as working with residents and those outside the village, “I think I can help residents take value in what they have and extend that value may never have even heard of Park Forest.”

Muhammad reflected on community relations in Park Forest, and some of the challenges she sees ahead, “First of all, I think there’s a lot of discontentment with how things are.”  She explained, “Not discontentment, that people aren’t necessarily happy with the way things are, but the idea that things can change is almost a foreign concept, even internally, whether it’s village staff or a member of the community.”  She says she has seen evidence of this among staff members as well. “I think that is the most challenging thought process to come up against, because it’s hard to win people over if they’ve already decided that nothing can change.”

Internally, she hopes to improve communication between village departments, and between the Village of Park Forest and community organizations and school districts.  She would like to further open lines of communication, “We all have the same mission.  We just have different jobs to get it done.”

Asked about race relations in Park Forest, Muhammad gave much credited to Barbara Moore.  “She was very passionate about breaking down walls and making sure Park Forest was diverse in both practice and in theory.  Following behind her makes it a little easier to address those issues and to see that there can be progress.  I think there’s a lot of misunderstanding with regard to Park Forest and the composition of Park Forest.  What you may see on the street may not be what the composition actually is.  I think there are pockets of Park Forest that can paint a picture for the whole village which is not necessarily accurate.  I think that kind of ties into [my] role of making the residents appreciate where they live."

She continues, “If everyone that lives here, if the majority of people that live here, enjoy living here, it sets a foundation to discuss those things, and it doesn’t matter what race you are. If you’re proud of where you live, it’s easier for you to talk to your neighbor who is also proud of living here.”

Muhammad emphasized many times in our interview the notion of pride, “If there’s pride in the community, it doesn’t matter what race you are, because you can be proud of where you live.  It makes it harder for someone to come in and drive a wedge between you, if you both have pride in where you live.”

Park Forest officials, staff, and residents often laud the village for its diversity. So what does diversity in Park Forest really mean? “I think diversity in Park Forest, from what I’ve noticed, is not just being multi-racial, but having different cultural expressions, where you have the opportunity to interact and learn from other cultures.  Even with the activities the municipality does, like the Main Street Nights.  Or like Tall Grass Arts Association, they have a variety of exhibits that you can go look at and learn something about a culture – they may not live in your neighborhood, but Tall Grass Arts Association is here.”

“I think just having that opportunity to see and observe, even if you don’t want to interact, you can’t avoid it.  It’s not segmented.  Even in Chicago – Chicago is diverse, but Chicago has neighborhoods.”

Sees Park Forest differently, “Even if you don’t want to embrace it, it’s out there.  It’s in your face.  You can’t run from it.”

Muhammad asserts her comfort with change and growth in Park Forest, returning to a theme discussed at the beginning of the interview, “Areas are changing, mind sets are changing, but how much they’re changing and why they’re changing are not being addressed.  People see some changes and they don’t know where it’s coming from, and they can jump to a conclusion about those changes."

She cautions against drawing conclusions based on peripheral observations around town, “Some things you can’t avoid.  You can’t avoid young men walking around with their pants hanging off their hips.  That’s a generational issue.  As much as we can try, there’s nothing we can do about it.  But a young man walking down the street with his pants hanging down is not indicative of Park Forest going to the wayside and becoming victim to vandalism and disrepair."

“We have to notice the changes and embrace the changes if they’re positive.  If they’re not positive, we need to get to the root of where it’s coming from, and what we can do. I am optimistic, though.”

And she expresses her optimism in no uncertain terms, “Park Forest is growing, Park Forest is developing, and you’re an integral part of that, and you have to take value in it, because, if you don’t, somebody else will.”