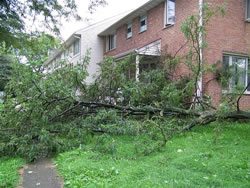 A tree lies on its side at the Ash Street Cooperative after storms on August 23. (Photo: Richard Whitehead )

Park Forest, IL—(ENEWSPF)— Trees fell on Ash Street and thick branches snapped like twigs on Lakewood during last week’s storm. Band members at Marian Catholic reported seeing a funnel cloud and lightening strike the parking lot on Joe Orr Rd. as they fled an outdoor rehearsal for the safety of the school building. After the second wave struck, many Park Foresters were without power, and traffic lights were out on Western Ave. Several businesses along Sauk Trail were also without power.

Director of Public Works Ken Eyer spoke Friday on work his crews were undertaking to clean up, “We’ve got some power outages around the village.  We have various size tree limbs from the first wave yesterday.  We had some street closures because large tree limbs had fallen across the street.  Crews are working on general cleanup now, trying to get everything back in order.  I haven’t had too many reports of flooding.  I think we’re making out pretty good compared to areas around us.”

Resident Richard Whitehead shared these photographs of the damage throughout Park Forest.