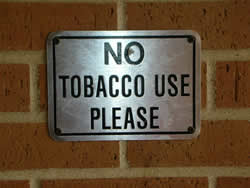 Park Forest, IL–(ENEWSPF)– The village board began its deliberations on a proposed non-smoking ordinance in Park Forest.  Cook County's Clean Indoor Air Ordinance will become effective throughout the county on March 15, 2007. This county-wide ordinance basically bans smoking in all public places and places of employment. This would include such places as restaurants, bars, offices, and other places where people gather.  The Cook County ordinance specifically excludes smoking rooms in a hotel or motel, private clubs (as defined by the ordinance), and private homes, unless the home is used for a licensed day care, adult day care, health care facility, or a home based business that is open to the public. Cook County’s ordinance will apply to all parts of the County unless a municipality within the county enacts legislation which supersedes it.  In other words, the Village of Park Forest can choose to adopt an ordinance which is more or less restrictive than the Cook County ordinance.

Park Forest's Economic Development Advisory Group (EDAG) has been deliberating on a recommendation regarding a non-smoking ordinance for several months, beginning in October 2006, and again in November and December.  Owners of Bixby's and Tattler's were invited to provide input.  At the December meeting, EDAG heard from a representative of the American Cancer Society regarding this issue.

EDAG's recommendations are similar to those of Cook County Clean Indoor Air Ordinance, with the following exceptions:

Sam Montella, Chairman of the Economic Development and Advisory Group, noted in a memo to the board noted that "the provision regarding smoking in a private residence was a difficult issue for EDAG and one on which there was not a unanimous decision."  Some members favored a total ban on smoking in private residences in which a home-based business is open to the public.  Such a move would be consistent with the Cook County ordinance.  Others did not want to regulate smoking in private homes at all, regardless of how it was used as a home-based business.

During the meeting, Director Planning and Economic Development Hildy Kingma commented that the recommendation from EDAG is less restrictive than the Cook County ordinance, "Under the Cook County ordinance smoking is prohibited in all home-based businesses where the public would be invited in.  EDAG is recommending that that be narrowed somewhat, only to include day care, adult day care, and health care facilities within a home-based business."

Trustee Reed inquired about two of the restaurants in Park Forest, "If a customer who hasn’t been in in some period of time, is the management going to be held responsible for that?  They have a lot of smoking customers, but they may not be every day customers.  If a customer comes in presuming the place to be a smoking facility, and they light up, is that a breaking of the rules for the management of the place, for the ownership of the place?”  Kingma responded, "It is based on complaints.  So, if somebody else complains, and there's an investigation and it's found that somebody smoked, then, yes, they would be held responsible.  But if somebody says, 'Oh, I made a mistake, I shouldn't have been smoking,' chances are that there's not going to be a violation.  I would think people are going to be reasonable."

Regarding enforcement, Delort said further, "That's the question this board has to decide. … We may want to opt out of the county's ordinance and just make this our own ordinance, so that we'll be writing tickets under our own system."  Kingma responded that it was EDAG's intent that this be Park Forest's ordinance, separate and independent from the Cook County ordinance.

Trustee Brandon, who serves as board liaison to EDAG, affirmed that this was the intention of the recommendation, "Having our own ordinance means that we have that control in enforcement."  Additionally, Brandon said, "One of the things that businesses will have to do is have a sign posted at the entrance that says not to smoke."

During public comments, Harold “Skip” Schmaltz, owner of Bixby’s in Park Forest, expressed his dissatisfaction with the ordinance,  “We are talking about my livelihood, and I’m going to stick up for it.  I’m sorry, but I think the decision that EDAG made is an entirely wrong one because it’s now tougher than the Chicago law.”

“Compromise is not a terrible word," he continued, "I hope everyone understands this.  It’s inevitable.  This is going to happen.  What we’re looking for is something to put us on a competitive playing field with everybody else that’s out there."  He expressed his concern that some would leave Park Forest, "If this is going to be more restrictive than Chicago, who’s going to stay here?  It makes no sense to do this to a small community who only has two places around.”

Paul Jasinivicius, a member of the Rich 227 School Board, commented on the proposed ordinance, "Cook County does allow a less restrictive ordinance than what they’re imposing on March 15, 2007.  And, as a Home Rule community, I don’t know if anybody is aware of it, but Park Forest was able to institute any kind of ordinance they wanted to regarding smoking in the past 10 years if they liked.  So, I don’t really see this deadline of March 15 as anything other than a smokescreen to start imposing a plethora of fines and restrictions on existing businesses."

He continued, “Another thing you might consider is grandfathering the two existing businesses we have in Park Forest so that they remain smoking environments forever, so that any new business coming in may see that as an advantage to come in as a non-smoking business, and they could offer an alternative to the existing businesses."

Jasinivicius also commented on taxes in Park Forest, “Now, somebody mentioned that Park Forest has the second highest tax rate in 163 school district next to Ford Heights.  Well, recently we’ve read in the newspaper how Ford Heights was able to attract new business without hiring any consultants, and if anybody hasn’t read about it, it’s the million dollar strip club that’s going to be going on the border of Lincoln Highway and 394 express way.  So, there are certain businesses that are attracted by high tax environments.  We have those Payday loan stores, some Dollar stores.  I think there’s a few others."

Interviewed at Bixby's, employee Barbara Thorpe said, "I think that when it goes through, we're going to lose a lot of business.  I think the owner of a building should choose if they go smoke-free or not."

The board will continue discussion of the ordinance at a future meeting.