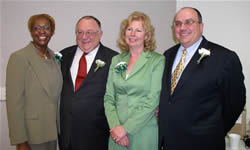 Park Forest, IL—(ENEWSPF)— Mayor John Ostenburg was sworn in for his third term at the Village Board Meeting on May 14. Incumbents Mae Brandon and Georgia O'Neill were sworn in as trustees, as was Gary Kopycinski. The standing-room-only crowd patiently sat through the meeting of the previous board, which had business to conclude before adjourning sine die (Literally from the Latin meaning, "without a day," or adjourning without setting a day for a future meeting). Judge Ray Funderburk performed the swearing-in ceremonies for Trustees Gary Kopycinski and Georgia O'Neill, and former Village Attorney and now Judge Mathias Delort swore in Trustee Mae Brandon and Mayor Ostenburg.

In remarks before the board, Ostenburg reflected on the campaign, "The image of our Village has been dragged through the dirt and grime of gutter politics," he said. "Residents of single-family neighborhoods falsely were led to believe that fellow citizens who reside in the cooperatives surreptitiously twisted the property tax system of the State of Illinois so as to gain an unfair advantage." Ostenburg made reference to his opponent, Paul Jasinevicius, who "was observed by a police officer defacing an opponent’s campaign sign in the early morning hours of Easter Sunday," as previously reported in eNews Park Forest.

Ostenburg also noted one campaign piece from his opponent, "Campaign literature showed my face superimposed on the figure of an individual wearing a Nazi storm-trooper’s uniform," which he found particularly disturbing. "Has there ever been occasion before in the 60-year history of our community when such tactics have been employed for political, or any other, purposes? I believe not."

He then praised Park Forest, "This is a community that embraced racial integration when other suburban cities and towns were fighting to keep it out. This is a community that has worked to keep partisan machine politics from influencing public policy in favor of a few at the expense of the many. This is a community where professionalism – and not a system of political patronage – dictates those to be employed in municipal positions. This is a community in which volunteerism has been a hallmark, demonstrating in crystallized fashion how neighbor might link arms with neighbor for the common good. These, then, are the reasons why we must condemn the tactics employed by some during this past campaign season, because they threaten the very fiber of what has made our beloved community – our Village of Park Forest – unique among municipalities of Chicagoland for the past six decades."

The mayor then turned his attention to school funing reform. "Proposals presently are before legislators in Springfield that will switch the burden for school finance off of the property tax and onto the state income tax," he said. "As you are aware, approximately 60 percent of the property taxes that you pay go to fund schools. One of our local school districts has a tax rate that is among the highest in the state. If we are ever to see meaningful tax relief in Park Forest and elsewhere in the south suburbs, we must change the way schools are funded in Illinois." He called on the residents of Park Forest to "participate in a massive lobbying campaign to make our legislators and our governor aware that we want more money for our schools and that we also want property tax relief. The two concepts are not incompatible. They are present in countless other states in the U.S., and they are possible in Illinois also."

The campaign, which involves postcard mailings, sending email messages, telephone calls, "and even visits to legislators’ district and Springfield offices," advocates for the passage of House Bill 750/Senate Bill 750, "because they provide more dollars for schools and also give significant property tax relief to Illinois residents by switching the burden for funding schools from the property tax to the state income tax and to an increase in the state sales tax," according to the postcards.

"Our goal is to make sure our legislators and the governor hear from no fewer than 1,000 residents of Park Forest before May 31. We want them to know that there is one entire community in the south suburbs where the residents vote and know how to be active in government affairs, and that we want to be heard on this important issue," Ostenburg concluded.

Postcards are available in Village Hall.