Park Forest, IL–(ENEWSPF)– Paul Jasinevicius, candidate for Village President in Park Forest, was warned last week to stop circulating a campaign brochure that uses copyrighted images. The images were originally created for literature used in Commissioner Brendan Houlihan's successful bid for a seat on the Cook County Board of Review. Reached by phone last Tuesday, Lloyd Betourney of the Public Response Group, the public relations firm that created the pieces for Houlihan, confirmed that he spoke with Jasinevicius last week, Monday, March 26, "I spoke with Paul yesterday when we were made aware of it.  I told him it’s copywritten [sic] material, and he would not be able to use it without permission.  It was a very simple and short discussion. He thought because he received it in the mail it was public domain.  Not at all.  It’s all work product and protected." 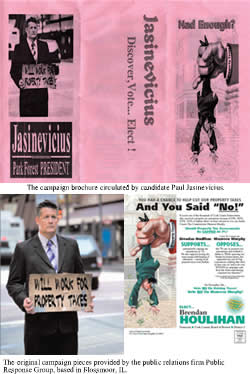 Betourney said he advised Jasinevicius that he should stop circulating the campaign literature that bears the copyrighted images, "He agreed to do so.  We’ll have to just wait and see." Betourney described how one image was used in Jasinevicius' brochure, "He had the photos scanned and then incorporated it in some type of quasi-print leaflet.  Clearly it’s the same photo." Betourney said the brochure also contained a second image from another Houlihan campaign piece, "There were actually two photos.  One was a photo, one was an illustration that was created."

Commissioner Brendan Houlihan commented briefly during a phone interview, "The firm that I used, Lloyd Betourney's contacted the candidate and told him that he did not have the authority to use those pieces, that they were copyrighted, and that he was breaking the law. So he's supposed to stop using them. He does not have the authority to use that. We're not endorsing him."

When contacted via email, Jasinevicius, who is challenging incumbent Mayor John Ostenburg, did not respond to eNews Park Forest's inquiry on the matter.