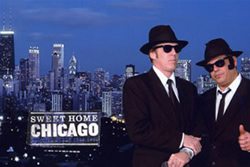 Park Forest, IL—(ENEWSPF)— This evening marks the final edition of Main Street Nights for 2007.  The evening begins with a gather for new residents to Park Forest at 6:00 p.m. at Dining on the Green.  All residents who moved to Park Forest over the past year are welcome.  Park Forest business owners, representatives from local churches, and village clubs and organizations have also been invited to participate.

At 7:00 p.m. an Antique Car Show on Main and Cunningham Streets kicks off the evening, along with music from Chicago’s Blooze Brothers.  The Blooze Brothers’ web site gives the group’s history:

The Blooze Brothers story, goes back over ten years. There have been many players, subs and friends that have helped us get to where we are. It is because of everyone over the years, that we have any history at all.

Chuck Little and John Aguila met in school in the 1960’s and became good friends. One of their common interests was music. The two performed in many bands together throughout their high school years, John on vocals and Chuck behind the drums. Chuck and John remained friends throughout the 70’s and 80’s, though their paths would take them on different journeys through life. After living out west for a while, John decided to move back to the Chicago area, where shortly after, he and Chuck reunited, this time as a two-man act paying tribute to The Blues Brothers (John Belushi and Dan Aykroyds’ signature Saturday Night Live skit). Aguila was to portray Belushi (aka Jake), and Little to portray Aykroyd (Elwood). The ‘music’ behind the two frontmen was supplied by a Karaoke style cassette tape. The act started as a gag at a friend’s party, but soon afterwards people started booking The ‘Blooze Brothers’ for various parties and events. The act was very successful — but both Aguila and Little knew that their next step was to get a backup band to replace the ‘canned’ accompaniment.

After the Blooze Brothers performance, around dusk, residents will be treated to a showing of Disney’s Freaky Friday on a 25 foot outdoor screen. The film stars Jamia Lee Curtis and Lindsey Lohan, and runs for 97 minutes.

A number of businesses in the Downtown are open during Main Street Nights, including One More Thing, Noemi’s Bridal, Tall Grass Arts Association, Miller Pizza, Hero’s Hoagies, and Salon Artists.  Representatives from Park Forest Baseball will also be selling food.

There is no charge for any of this evening’s events.