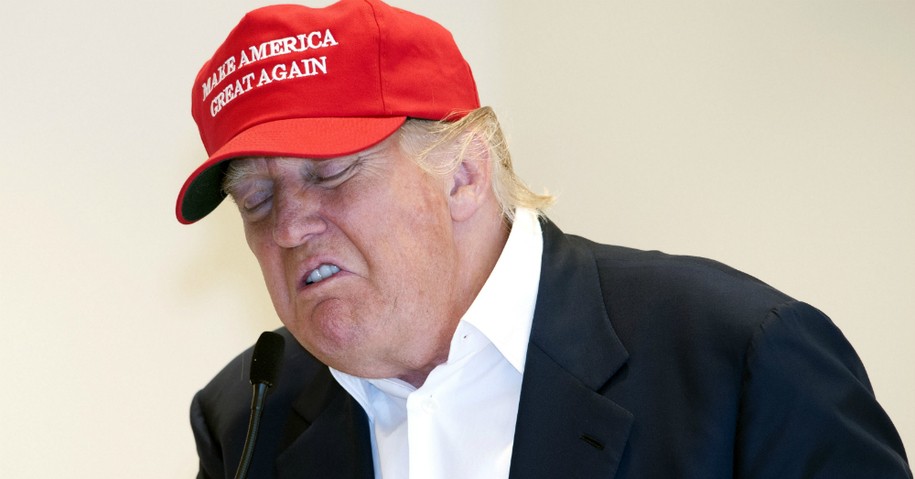 The cap does not look good on you, it’s a duffer’s cap, and when you come to the microphone, you look like the warm-up guy, the guy who announces the license number of the car left in the parking lot, doors locked, lights on, motor running.

In the Washington Post (and reprinted in the Chicago Tribune and probably others), Mr. Folksy Nice Guy himself, Garrison “Woebegone” Keillor, completely eviscerated (hyperbole duly noted) Trump in a searing, spot on, second-person parodic take-down and he just nailed it, playing off of Trump’s insecurities and his yearning to be taken seriously.

And The New York Times treats you like the village idiot. This is painful for a Queens boy trying to win respect in Manhattan where the Times is the Supreme Liberal Jewish Anglican Arbiter of Who Has The Smarts and What Goes Where. When you came to Manhattan 40 years ago, you discovered that in entertainment, the press, politics, finance, everywhere you went, you ran into Jews, and they are not like you: Jews didn’t go in for big yachts and a fleet of aircraft — they showed off by way of philanthropy or by raising brilliant offspring. They sympathized with the civil rights movement. In Queens, blacks were a threat to property values — they belonged in the Bronx, not down the street.

Keillor, who’ s Americana brand of storytelling you either love or hate, (as a fellow native Minnesotan, my relationship with him is love/hate) earns *all* of the props in the world for this subtle but not subtle take down. I could quote sections like mad but you have to just read it.

You can read Garrison Keillor’s entire commentary at: Chicago Tribune

Previous articleNYT Obtains Trump’s Scripted Responses for Staged Q&A at Black Church
Next articleDan Rather Pens Fierce and Poignant Assessment of Trump’s Speech: ‘It was Red Meat for the Crowd’