Washington DC–(ENEWSPF)– When the right-wing media attack machine gets revved up these days, it’s a rare thing not to find Glenn Beck in the driver’s seat. That said, it’s unheard of that Beck, who expresses his frustrations with the Obama administration by pretending to light people on fire, would actually stand athwart his colleagues’ hyperbolic attacks on the White House and actually come off as a voice of (relative) reason.

But these are strange times, and that’s exactly the situation we found ourselves in this week as conservatives grasped at each and every straw in attempting to politicize the failed car-bombing in Times Square and blame it all on President Obama.

When word got out that the authorities had arrested Faisal Shahzad as the suspected would-be bomber, Fox News immediately began complaining that Shahzad, a naturalized U.S. citizen, might be read his Miranda rights. Confronted with Fox & Friends host Brian Kilmeade’s scenario that Shahzad might "know information that could wipe out some of your friends and family," Beck supported giving Shahzad his constitutionally protected rights. Of course, Beck’s commitment to good civics was selective and short-lived, and just a few hours later, he expressed his desire to personally waterboard another terrorism suspect and otherwise torture non-U.S. citizens.

But still, it’s a sad commentary on the state of the right-wing media when Glenn "OLIGARH" Beck comes off as (slightly) more reasonable than the company he keeps.

And just how out-of-hand did things get? Right from the get-go, conservatives were claiming that the Times Square plot shows that the White House doesn’t care about terrorism, or is actually inviting terrorism by being too nice to Muslims. Former CIA employee and longtime sayer of crazy things Michael Scheuer pronounced the failed attack a "100 percent success" for terrorists and attacked the president, saying he "has made things much, much worse because he promised the Muslim world things that he will never do" and "bowed to the Saudi king," showing "subservience." New York Post columnist and longtime sayer of crazy things Ralph Peters wrote that the administration "goes to absurd lengths to convince Muslim radicals that we respect their views," and this sort of "appeasement" emboldened Shahzad.

The reality of the situation is that the administration has been killing, capturing, and convicting terrorists like it’s their job. Because, you know, it is. In fact, Shahzad reportedly told authorities that he was driven to attack the United States because we’ve become way too good at killing terrorists.

Then there came word that the Obama administration might have removed Shahzad from a terrorist "watch list" prior to the attempted attack. The third-rate right-wing blogger who started this story (which predictably jumped to Fox News) based the claim on a CBS News report saying that Shahzad was on the list from 1999 to 2008. For those of us with even a semi-firm grasp of the American political system and the immutable progress of time, it was immediately clear that Barack Obama could not have removed Shahzad from that list because he was president for exactly zero days between 1999 and 2008.

And, of course, no high-profile act of violence can be committed on U.S. soil without the right claiming that the perpetrator is a liberal Democrat, and thus Rush Limbaugh, picking up where the blogosphere left off, proclaimed: "Guess what? Faisal Shahzad is a registered Democrat." To be a "registered Democrat," however, one has to register to vote, and Shahzad had not fulfilled that requirement.

The lesson to take away from all of this is that right-wingers make these sorts of ludicrous statements about Obama ignoring terrorism and appeasing our enemies not just because they themselves are detached from reality, but because they really have no other option. As Slate.com’s John Dickerson observed, Obama "has spent a lot of time formulating and putting in place anti-terrorist policies and giving speeches devoted to the more efficient killing of terrorists," and that strategy has been effectively implemented. Sure, they could argue as to whether the strategy best serves U.S. interests, but why engage in an informed discussion about terrorism when there’s politics to be played?

Other stories this week:

It wouldn’t be a normal week without a scandal over the complete lack of journalistic standards at Fox News. Once again, they didn’t disappoint.

On Monday, Neil Cavuto hosted disgraced former FEMA director Michael Brown to discuss the catastrophic oil spill in the Gulf of Mexico. Rather than share his expert advice on how to properly mismanage disaster relief and judge show horses, Brown used the time to throw around insane conspiracy theories about the Obama administration’s response to the spill.

Brown repeatedly suggested that the administration deliberately let the spill worsen so it would have an excuse to "shut down offshore drilling." This apparently didn’t bother host Neil Cavuto, who offered no pushback.

On Wednesday morning, Bill O’Reilly got involved, telling ABC’s George Stephanopoulos on Good Morning America that he "would have slapped" Brown if he had made the comments on the Factor, "but he was on another program." While this certainly sounded like a repudiation of Cavuto, O’Reilly was singing another tune when he returned to his own show, falsely claiming that Cavuto "stuck up" for Obama during the Brown interview.

Cavuto was apparently so impressed with Baier and Hume’s dishonest defense that he adopted it on his own show the next day — focusing on the same insignificant distinction and refusing to air the worst of Brown’s comments (or discuss his complete failure to challenge them). According to Fox’s response, the fact that Brown only suggested that the administration let the spill worsen on purpose rather than claim it started it isn’t too troubling.

After all, Brown was merely echoing Fox’s Eric Bolling, who pushed almost the exact same conspiracy theory on Fox & Friends on Monday morning. As Media Matters president Eric Burns noted on MSNBC, by pushing these absurd oil spill conspiracy theories, Fox is putting itself "in a league with the 9-11 truthers."

The Phoenix Suns, "Protesting the American Dream" of racial profiling

The controversy over the recently passed Arizona immigration law crossed over into the sports world this week, and conservative media figures responded with their usual combination of smears and dishonesty.

On Tuesday, the Phoenix Suns announced they would wear their "Los Suns" jerseys during a May 5th playoff game in order to, in the words of managing partner Robert Sarver, "honor our Latino community" and the "diversity of our league." Sarver expressed concerns about the law’s effects on "basic principles of equal rights and protection." Suns star Steve Nash echoed Sarver’s concerns by saying the law "really damages our civil liberties."

Apparently not convinced by Nash and Sarver, Fox News ran with a slightly different interpretation of the Suns’ protest: 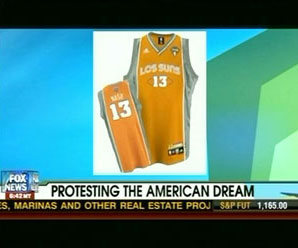 Fox wasn’t alone in attacking the Suns. Limbaugh called the protest "cowardice," and Michelle Malkin labeled the team the "open-borders sympathizing Phoenix Suns." Despite the fact that the team unanimously agreed to wear the jerseys, Brian Kilmeade decided the players were forced to be used "as billboards."

Of course, the Suns’ political statement wasn’t the only angle conservatives found to mislead on immigration policy this week. Since the start of the debate over the immigration law, numerous conservatives have cited violent crime in Arizona as a reason the new law is important.

As Media Matters documented, Phoenix police chief Jack Harris rejected the conservative argument, pointing out that it’s not "true" that "the new law provides a tool for local law enforcement." Others in law enforcement officials agree that the new law could distort police priorities. Additionally, despite the prevailing narrative among conservative media figures, crime rates in Arizona are at their lowest point in decades.

Promoting conservatives’ fearmongering over crime and immigration, Fox & Friends ran with an absurd "estimate" from Family Security Matters that there are "2,158 killed by illegals every year." The "crude" statistic relied on baseless assumptions about immigrants’ crime rates. As we noted, less ridiculous studies have found that immigrants in general are less likely to be incarcerated, and there is no credible evidence that undocumented immigrants commit a disproportionate amount of crime. Other than that, though, it was very responsible of Fox News to run with this "estimate."

With this latest "study" debunked, Family Security Matters can return to the important business of promoting the birther conspiracy theory.

This weekly wrap-up was compiled by Simon Maloy and Ben Dimiero.