Did the GOP Commission Fox to Rewrite the History Books?

VARNEY: Yes, well look. What happened when President Reagan took office in January 1981? We had double-digit unemployment. He cut taxes, set off a growth of prosperity for a generation. Now we’ve got President Obama in; he inherits a nasty recession, he raises taxes and raises spending. He has not cut unemployment. There’s a difference in reaction to a nasty situation. One works, one doesn’t work. I’m very partisan. I’m very clearly partisan. Sorry, ladies and gentlemen.

As noted earlier, federal taxes are very considerably lower by every measure since Obama became president. And given the economic circumstances, it’s hard to imagine that a tax increase would have been enacted last year. In fact, 40% of Obama’s stimulus package involved tax cuts. These include the Making Work Pay Credit, which reduces federal taxes for all taxpayers with incomes below $75,000 by between $400 and $800.

AP: “Americans are paying lower taxes this year.” The Associated Press reported on April 14, “You wouldn’t know it by the Tax Day rhetoric, but Americans are paying lower taxes this year, even with increases passed by many states to balance their budgets.” While noting that in future years some taxes may increase for some Americans, the article said that “Tax Day rhetoric,” i.e. complaints by some of being overtaxed, does not match the reality of Americans’ current tax burdens. From the article:

Congress cut individuals’ federal taxes for this year by about $173 billion shortly after President Barack Obama took office, dwarfing the $28.6 billion in increases by states.

The massive economic recovery package enacted last year included about $300 billion in tax cuts over 10 years. About $232 billion was in cuts for individuals, nearly all in the first two years.

The most generous was Obama’s Making Work Pay credit, which gives individuals up to $400 and couples up to $800 for 2009 and 2010. The $1,000 child tax credit was expanded to more families, and the working poor can qualify for as much as $5,657 from the Earned Income Tax Credit.

There were also credits for qualified families who buy new homes or make energy improvements to existing ones, as well as tax breaks to help pay college tuition or buy new cars.

Tax-cut amnesia is News Corp.-wide phenomenon. In response to Obama’s State of the Union assertion that “we cut taxes,” Fox Forum columnist Peter Roff wrote, “We cut taxes? How did I miss that?” Fox News contributor S.E. Cupp similarly wrote, “Cut taxes?! WHAT?” The New York Post also asked if Obama was in “Opposite Land” when he “claimed to have cut taxes and saved ‘millions’ of jobs.” In July 2009, Stephen Moore said on Fox News that “[t]he one thing this administration won’t do is cut taxes,” when, in fact, it already had cut taxes.

CBS: “Poll Reveals Most Americans Don’t Know They Got a Tax Cut.” A February 5-10 New York Times/CBS News poll found that only 12 percent of respondents “think the Obama Administration has … decreased taxes for most Americans.” CBS wrote that “[o]f people who support the grassroots, ‘Tea Party’ movement, only 2 percent think taxes have been decreased, 46 percent say taxes are the same, and a whopping 44 percent say they believe taxes have gone up.”

VARNEY: What you’re quoting there is Debbie Wasserman Schultz, Florida Democrat, who said on my show on FBN, she said, look, you take the first four months of this year, extrapolate out, and we’ve created more jobs in that year than Bush did in his eight years. Well, you’re cherry-picking time frames. You’re making a prediction of a trend, which simply isn’t there, and you’re ignoring reality. The reality is that in the middle of Bush years, and you’ve spoken about this, Brian [Kilmeade], 2003 to 2007, George Bush created 8 million new jobs. And that’s ignored here.

By cherry-picking just four years of Bush’s administration, Varney erased two recessions; in fact, only 1 million new jobs were created during Bush presidency. According to data from the Bureau of Labor Statistics, the number of nonfarm jobs increased from 132.5 million in January 2001 to 133.5 million in January 2009, an increase of only 1 million jobs. By contrast, employment increased by 22.7 million under Clinton, 16.1 million under Reagan, 10.3 million under Jimmy Carter, and 2.6 under George H.W. Bush.

By including only data from 2003 to 2007, Varney erased the job impact of the recessions that began in 2001 and in 2007. The Washington Post reported in January 2009 that “economists, including some former advisers to Bush” say the expansion during the period Varney highlighted “was driven to a large degree by the interrelated booms in the housing market, consumer spending and financial markets,” which “have proved unsustainable.” 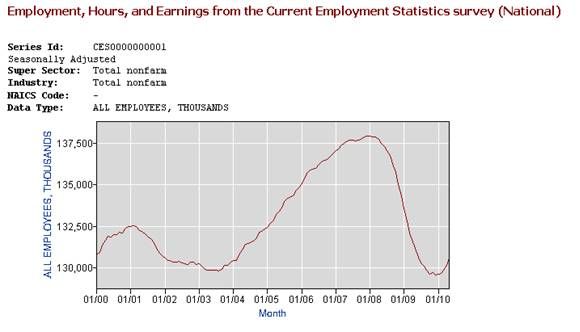 Bush employment growth worst of all post-WWII administrations. The New York Times reported on January 23, 2009, that during the Bush administration, “Employment grew at a compound annual rate of only 0.3 percent, half the 0.6 percent rate that his father had recorded in what had previously been the worst post-World War II performance.”

DOOCY: We’re looking at U.S. unemployment over the last 12 years — 12 months, that is to say. But when you look over the last number of decades, Obama is in a bad spot because when you look at, starting with LBJ, he had unemployment at 4 percent. Ike was under 5, Nixon 5, Clinton 5, Bush 43 5, JFK 6, Bush 41 — and just read along. Obama’s at the bottom with over 9 percent. 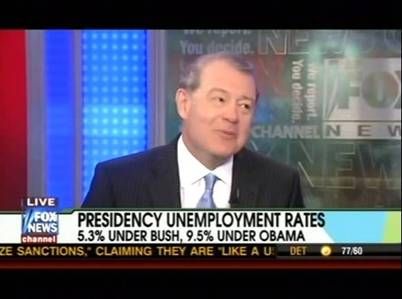 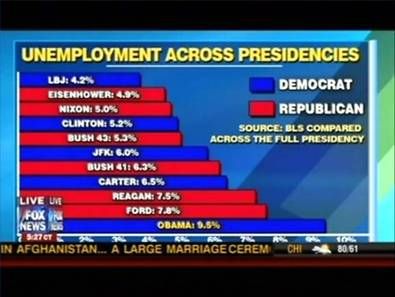 Varney falsely claims that after Clinton took office, “economy was not stimulated” until “the Republicans swept in”

From the June 10 edition of Fox & Friends:

VARNEY: And gave us 51 consecutive months of economic growth. That was the direct result of tax cuts, which stimulated the economy. Now, I know you’re gonna refer to President Clinton. First thing he did when he comes into office, he raises taxes on the top 1 percent of income earners. The immediate result of that was not to stimulate the economy. No, the economy was not stimulated until 1994, when the Republicans swept in, put a collar on government spending, and made sure that we were fiscally sound. Then the economy took off, and revenues took off.

Economy was recovering before Republicans took control of Congress. Contrary to Varney’s claim that “the economy was not stimulated until 1994, when the Republicans swept in, put a collar on government spending, and made sure that we were fiscally sound,” the economy had, in fact, been recovering before that point. According to data from the Bureau of Economic Analysis, GDP increased 4.1 percent in 1994, before the Republicans controlled Congress, and had been recovering since 1991, when GDP fell .2 percent. The economy continued to grow throughout the 1990s. 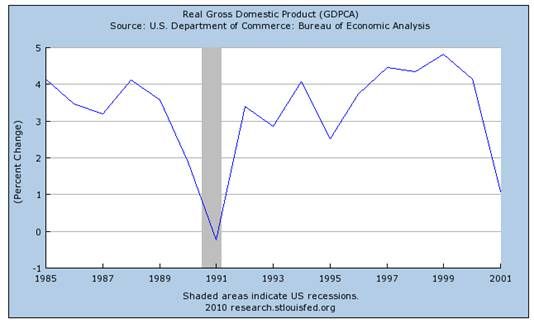 From the June 10 edition of Fox & Friends:

VARNEY: Yes, well look. What happened when President Reagan took office in January 1981? We had double-digit unemployment. He cut taxes, set off a growth of prosperity for a generation.