When Glenn Beck opens the week by spending more than 15 minutes addressing his despicable attack on President Obama’s 11-year-old daughter and says he has “never” dragged an opponent’s family “into the debate,” is he:

A Correct. This was an unprecedented departure from his usual behavior.

B Wrong, and well aware he is being dishonest.

C Wrong, and somehow either oblivious to his history or self-deluded enough to convince himself he is right.

Option A is categorically false. As we have detailed extensively, Beck’s attack on Malia Obama was merely the latest in a long string of smears of the first family. For example, last April — in a video that truly needs to be watched to appreciate how unnecessarily vicious it is — Beck cracked himself up while brandishing a cane and repeatedly mocking Obama’s aunt’s “limp.” It’s unclear how this information was relevant to Obama’s aunt’s visa status, which is what he was purportedly discussing.

On multiple occasions, Beck has attacked President Obama’s parents, blaming them for raising “the most radical president ever.” His attack on Malia Obama wasn’t even his only attack on the President’s children last week. Beck speculated that Sasha and Malia may think “Jews are destroying the world” because of their exposure to Rev. Jeremiah Wright.

So, Beck is absolutely wrong when he claims he has “never” dragged an opponent’s family into the debate. There is no wiggle room here — which leaves us with the final two options. He is either willfully lying to his viewers, or has become so untethered from reality that he actually believes his own falsehoods.

Therein lies the Glenn Beck Conundrum. (For additional illumination of this, watch this segment from last night’s Daily Show in which Jon Stewart demolishes Beck’s ridiculously false claim that only Beck and Fox News aired Israeli footage of the flotilla raid.)

Of course, it’s not unusual for Beck to completely misrepresent his own behavior. In addition to his inaccurate explanation of his attack on Malia, on his radio show on Wednesday, Beck attempted to clear up what he perceived as possible confusion over his comparison of American progressives to Nazis in Germany, saying that “anyone who thinks that they are mimicking Nazi Germany or whatever — or they think that that’s what I’m saying — that’s not what I’m saying at all.”

If that’s not what he’s been “saying,” it’s hard to decipher what his point was when he repeatedly compared various Obama administration officials and Al Gore to Nazi propagandist Joseph Goebbels. Not to mention the countless other times he has portrayed Obama and perceived progressive policies as Nazi or Hitler-like.

Beck also said during his explanation of his smear of Malia that he hoped the attack is his “bottom,” adding, “All Friday, I asked myself, how could it have happened?” The suggestion is clear: Beck had been driven to anger that was totally out of character. Contrary to Beck’s suggestion, vicious personal assaults on his perceived enemies and their families are not at all out of character for him. Among other examples, Beck has:

This behavior led Beck biographer Alexander Zaitchik to remark in an interview with Media Matters’ Joe Strupp this week that he “wasn’t prepared for the depth of Beck’s mean streak.”

Proving Zaitchik’s point, mere days after suggesting that attacks on opponents’ families were out of character, Beck joined co-host Pat Gray in impersonating Al and Tipper Gore, laughing about the dissolution of their marriage.

While addressing his attack on Malia Obama, Beck also lamented that he doesn’t “know why we’re not having real conversations” in America. This was during the same show wherein he compared the current state of our country to the biblical story of Moses and the films Star Wars and Robin Hood, and cited a supposed epic national division between supporters of Woodstock and the Apollo Project.

This is also the guy who once illustrated President Obama’s policies by mimicking pouring gasoline on a person, who frequently suggests progressives will resort to violence against conservatives — including last week saying “eventually they just start shooting people” — and who has spent much of the past year and a half scrawling absurd conspiracy theories on a chalkboard. But Glenn Beck “doesn’t know why we’re not having real conversations.” OK, then.

Which brings us back to the Glenn Beck Conundrum.

Which is it, Glenn? You are either willfully lying to your viewers, or you are completely, provably wrong — yet somehow convinced you aren’t.

Regardless, one thing is certain: When you say that you’ve never dragged people’s families “into the debate,” you certainly aren’t right.

And if you don’t want to answer that, at least let us know why you spent several minutes on your radio show today promoting the book of a raging anti-Semite who praised Hitler and denounced the Allies.

More than a week after the wheels came off conservatives’ latest attempt to drum up a phony scandal, media figures like Dick Morris are still pushing the idea of “impeachment.”

In the past couple of weeks, conservative media figures have relied on a series of myths and falsehoods to promote the supposed scandal involving the White House’s conversations with Democratic Senate candidates Joe Sestak and Andrew Romanoff concerning those candidates taking positions in the administration.

To recap a few of the big ones: With Sean Hannity leading the charge, conservatives have claimed that the Sestak offer violated federal law. This has been systematically debunked by both Media Matters and legal experts. Hannity, among others, has repeatedly suggested that the Sestak offer violated the bribery statute, as well as a series of other laws. Legal experts, including former Bush ethics adviser Richard Painter, have repudiated this idea.

On to Romanoff: Conservatives claim Romanoff was “offered a job” to exit a Senate race. He wasn’t. They claim the White House committed a crime during the Romanoff conversations. It didn’t. They have claimed the White House lied about the discussion. Wrong again.

Lost in all of this is the staggering hypocrisy of conservative media figures. As numerous historians and legal experts have noted, this kind of conversation is commonplace (including among right-wing heroes like Ronald Reagan). But for truly A-grade, gold medal hypocrisy, we turn (as we often do) to Karl Rove. Rove, who insisted the Obama administration violated a federal statute in its Sestak conversations, once reportedly offered someone from the other political party a job to prevent him from running for re-election.

After Scooter Libby was indicted, several members of the conservative media decried what they deemed “criminalizing politics.” No longer the party in power, many of these same media figures have rushed to declare that the White House’s “garden-variety” politics broke laws.

While this is all par for the course for the noise machine, supposed “mainstream” press outlets have fallen down on the job merely by giving this ridiculousness the attention and oxygen it needs to survive. The Atlantic’s Marc Ambinder captured this problem well in an article ripping the media’s reporting of the Sestak and Romanoff “controversies” [emphasis added]:

More potentially pernicious than liberal bias, than the false equivalences bias, than really just about any other bias that journalism that inject into a public discussion of a story is the power that comes from merely selecting which subjects to cover. Whatever the collection of facts about White House officials attempting to influence primary elections is, it is not a scandal. It is not the type of story that journalists with credibility and experience should be selecting to cover. It’s the type of story that journalists ought to resist covering, precisely because the act of giving it attention elevates the arguments that don’t correspond with the truth. If journalism is good for anything, it is to provide what Republican Bruce Bartlett calls “quality control” over the narrative. Well, a big mess just slipped by.

Unfortunately, it looks like we’ll be cleaning up this particular mess for a while.

Speaking of messes, the BP oil spill continues unabated, which has given conservative media figures ample opportunity to act like clowns. They haven’t disappointed.

Kicking off the trend of conservatives ludicrously blaming environmentalists for the catastrophic BP oil spill, Sarah Palin took to Twitter this week with her usual blend of condescension and dishonesty: 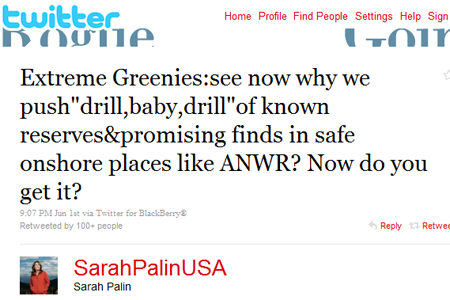 Palin clearly implied that her slogan “drill, baby, drill” — which was eagerly co-opted by Fox News — was only about drilling in places like ANWR, not offshore. It’s a typically Palin-esque way to deflect blame. Big problem, though: It is outrageously, jaw-droppingly false.

As Media Matters’ Simon Maloy noted this week, Palin repeatedly, explicitly promoted offshore drilling while on the campaign trail. And, to top it off, last month Palin said that the BP spill should not change the state of our offshore drilling during an interview with Greta Van Susteren.

Despite Palin’s suggestion that the spill somehow vindicated her position on drilling, it did no such thing. Now do you get it, Governor?

Sadly, Palin and fellow conservatives’ attack on environmentalists for the oil spill was not the only depressingly inane media coverage of the oil spill this week.

On Wednesday, Kilmeade seamlessly transitioned from attacking the Obama administration for announcing a criminal investigation into BP’s role in the oil spill to praising Louisiana Gov. Bobby Jindal’s call for accountability for BP. Kilmeade complained that the Justice Department’s announcement had “just tank[ed] the stock market,” adding, “Was that smart?” Only a few minutes later, Kilmeade praised Jindal for “taking action” and saying to BP “you’re going to be held accountable.”

To follow Kilmeade’s logic here: Accountability is good as long as it is both theoretical and discussed by a Republican, but bad when it is concrete and announced by a Democrat.

Kilmeade wasn’t alone in attacking the Justice Department for its criminal investigation of BP. He was joined by Charles Krauthammer, Peter Johnson Jr., Stuart Varney, The Washington Times, BigGovernment.com, and Rush Limbaugh.

Editor’s note: This wrap-up was going to include a section on James O’Keefe and Andrew Breitbart’s latest dishonestly edited videotaped escapades. However, like everyone else, we found their exposé on extended lunch breaks for Census workers during training to be incredibly boring.

This weekly wrap-up was compiled by Media Matters’ Ben Dimiero.