Washington, D.C.–(ENEWSPF)– Right-wing blogs — and now Fox Nation — have seized on a Daily Mail write-up of a BBC interview with Dr. Phil Jones, who was heading the Climatic Research Unit at the University of East Anglia until the political fallout from the infamous hacked emails forced him to temporarily step aside pending an inquiry.

In the interview, Jones was asked, "Do you agree that from 1995 to the present there has been no statistically-significant global warming." He responded (caution: a brief bit of math-speak ahead):

In other words, Jones is stating he didn’t find statistically significant evidence of warming from 1995 to 2009, but that doesn’t mean it isn’t occurring. Indeed, later in the interview, Jones says that he is "100% confident that the climate has warmed" and that "there’s evidence that most of the warming since the 1950s is due to human activity."

Predictably, the Right chose to focus on only his comments about the period from 1995 to 2009.

The Daily Mail headline set the framework for the American right-wing echo chamber: "Climategate U-turn as scientist at centre of row admits: There has been no global warming since 1995."

The Drudge Report linked to a Daily Mail editorial about the article with the headline: "The professor’s amazing climate change retreat…"

At its worst — and most malicious — here’s what the Daily Mail‘s terrible write-up led to: 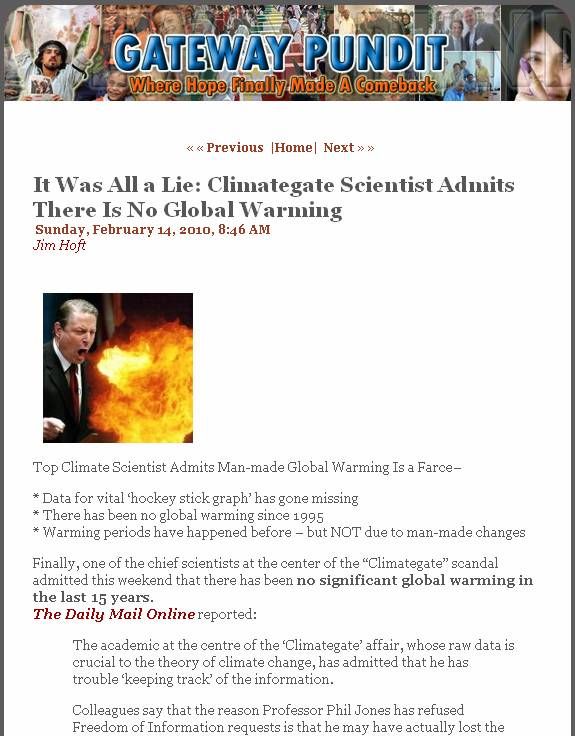 In fact, the only thing that was "all a lie" was Gateway Pundit’s headline. Jones did not admit "there is no global warming."

I’m 100% confident that the climate has warmed. As to the second question, I would go along with IPCC Chapter 9 – there’s evidence that most of the warming since the 1950s is due to human activity.

In their attacks on global warming — and on Jones and the CRU specifically — the right-wing media have frequently accused scientists of cherry-picking data. This is often because of their ignorance — in some cases, willful — of statistics and scientific research methods.

But it doesn’t take a scientist to see how the conservative pundits cherry-pick false or misleading statements from poorly written British reports to advance their political agenda.