Washington, D.C.–(ENEWSPF)– It is truly amazing that Time allowed Mark Halperin to publish the following caption and image on his blog, The Page — no matter how briefly (the site has since pulled it down): 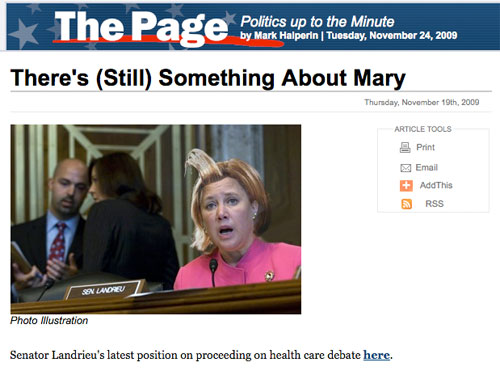 Maybe Halperin thought it was really clever to echo a scene from a late-90s romantic comedy, but it isn’t. The image and all that it suggests — yes, her hair is supposed to be held up by semen — isn’t supported by any facts provided by Halperin in his post. The page to which he links doesn’t have anything to do with semen, romantic comedies, or hair gel. In fact, it’s a statement from Sen. Mary Landrieu’s (D-LA) Communications Director "on motion to proceed timing" on the Senate’s health care reform bill.

In other words, it’s part of a broader, sexist right-wing narrative that the U.S. Senator from Louisiana is, as Glenn Beck put it yesterday, "a high-class prostitute" engaged in "hookin‘" — all because she lobbied Senate leadership for expanded Medicaid funding for Louisiana in the Senate health care bill in what was characterized by the media as an exchange for her "yea" vote to proceed with floor debate on the bill.

Not to be left out, Rush Limbaugh got in on the action yesterday too, declaring that Landrieu "may be the most expensive prostitute in the history of prostitution."

These types of backwards, sexist remarks are what we have come to expect from Beck or Limbaugh, but this is truly a new low for Halperin, and, by association, for Time. As my colleague Julie Millican pointed out last week, the other weekly news magazine — Newsweek — has a sexism problem that it needs to address concerning another female politician.

So let this serve as a word of warning to those media figures like Halperin who like to think of themselves as separate and apart from — perhaps I should say above? — right-wing bloviators and pot-stirrers like Beck and Limbaugh: When you engage in baseless, sexist smears of women politicians, you are no different than the side-show commentators. Maybe you’re worse — at least they don’t purport to be journalists.