Washington, D.C.–(ENEWSPF)– The Washington Times continued its anti-gay war on Department of Education official Kevin Jennings in a December 8 editorial entitled "Obama’s buggery czar," the paper’s ninth editorial smearing Jennings since late September. The Times editorial advanced several false and misleading claims in order to paint Jennings as a "moral malefactor" who supported and promoted "kids having sex with adults" as well as "homosexuality and promiscuity."

Wash. Times: In speech, "moral malefactor" Jennings discussed advising "a 15-year-old…who was having sex with an older man" to "use a condom." In the December 8 editorial, The Washington Times claimed: "Mr. Jennings is the moral malefactor who gave a speech about how he merely advised a 15-year-old high-school sophomore who was having sex with an older man that, ‘I hope you knew to use a condom.’" The Times previously claimed in a September 28 editorial that Jennings had "encouraged" the "statutory rape" of the student.

In fact, counseled student was 16, the age of legal consent, as the Times has previously acknowledged. Despite the Times‘ suggestion that the student Jennings counseled regarding an encounter he had with an older man was 15-years-old, as Media Matters has previously reported, the student has confirmed that he was 16 at the time of the incident, which is and was the age of consent in Massachusetts. Indeed, the Times itself has already acknowledged the evidence that the student in question was 16 at the time.

In fact, Jennings’ praise of Hay had nothing to do with NAMBLA. Jennings mentioned Harry Hay in a 1997 speech to GLSEN and the transcript was published by anti-gay activist Peter LaBarbera. However, Jennings’ praise was of Hay’s work as an early gay rights activist and had nothing to do with NAMBLA, as the Times suggested. Jennings reportedly stated: "One of the people that’s always inspired me is Harry Hay, who started the first ongoing gay rights groups in America. In 1948, he tried to get people to join the Mattachine Society. It took him two years to find one other person who would join. Well, [in] 1993, Harry Hay marched with a million people in Washington, who thought he had a good idea 40 years before."

But Times distorted book passage to claim GLSEN reading list promoted idea that "being exploited by homosexual pedophiles… can make children happy and fulfilled." According to the Times, "eleven of the recommended books were examined by Scott Baker from Breitbart.tv and re-examined by The Washington Times." The Times claimed that according to their examination of the texts, the readings promote the idea that "being exploited by homosexual pedophiles is portrayed as something that can make children happy and fulfilled." But, as evidence, the Times distorts at least one of the readings. The Times claimed that a passage in Queer 13, one of the books on the GLSEN reading list, describes "a 13-year old boy who has sexual encounters with older men. His experience caused him to desperately want sex." The Times quotes the author as saying "that feeling of doing it to them and them doing the same for me was just too damn good." However, contrary to the suggestion that this passage depicted a child made "happy and fulfilled" by sexual encounters with older men, the author said his encounters included "brutal and painful experiences" and described this period of his life as "the beginning of my worthlessness." From Queer 13, page 45:

This was the year I realized I was helpless, different, wholly alone and defenseless. This was the beginning of my worthlessness. It was always pointed out to me that I wasn’t good enough and that there was always someone somewhere doing better, and that no matter what I did, I could still have done better.

Times cropped GLSEN disclaimer on reading list to omit that GLSEN recommended that adults review content before providing to youths. The Times wrote of GLSEN’s Booklink disclaimer: "The organization Web site reassures us, ‘All BookLink items are reviewed by GLSEN staff for quality and appropriateness of content.’" The Times omits that the GLSEN disclaimer goes on warn that "some titles for adolescent readers contain mature themes," and "recommend[s] that adults selecting books for youth review content for suitability." From the BookLink section of GLSEN’s website: 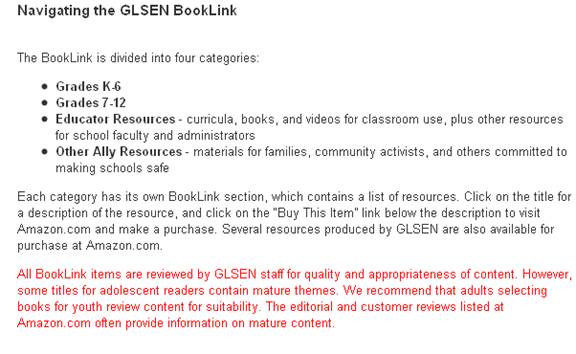 Wash. Times penned eight other editorials smearing Jennings. According to a search of the Nexis database, the Times‘ editorial board wrote at least eight editorials specifically targeting Jennings between the dates of September 28 and October 22. At least two additional editorials published during that period portrayed him in a negative light.

Editorials advanced falsehoods and distortions to discredit Jennings. As Media Matters for America has extensively documented, a number of the Times‘ editorials targeting Jennings advanced false claims or distortions and are riddled with anti-gay rhetoric.