Washington, D.C.–(ENEWSPF)– WorldNetDaily falsely claimed that alleged Fort Hood shooter Nidal Hasan "advised Obama transition" in the headline of an article by Jerome Corsi highlighting his listing as a "participant" in a report for the Homeland Security Policy Institute (HSPI) at George Washington University’s Presidential Transition Task Force. However, Corsi himself acknowledges that there is no evidence that "the group played any formal role in the official Obama transition" — indeed, the Task Force was initiated in April 2008. Moreover, while Hasan was listed as one of approximately 300 "Task Force Event Participants" in the report’s appendix, HSPI has reportedly said he was not a "member" of the Task Force, and was listed because he RSVP’d for several of the group’s open events.

From the November 6 WND article: 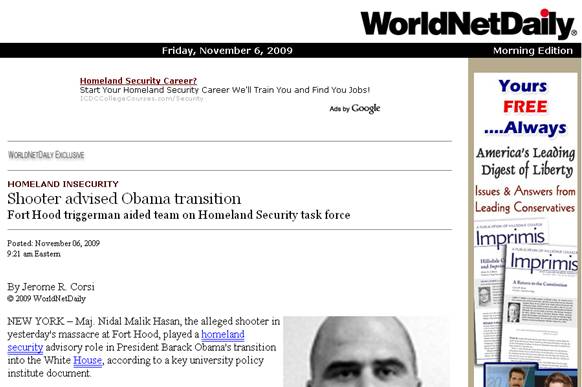 WND claim contradicted by HSPI report and WND article itself

According to HSPI, Hasan not a Task Force member, listed because he RSVP’d for groups’ open events. In a November 6 blog post, Gawker reported:

FRIDAY MORNING UPDATE: Daniel Kaniewski, the institute’s deputy director, confirms that Hasan attended task force meetings as an audience member, and stresses that he was not a member of the task force. "All of our events are open to the public," Kaniewski says, "and when someone RSVPs we put their name in the [report] so everyone knows who was in the room." He says institute staffers recall Hasan attending at least one task force event, and that he RSVP’d for several. "We do recall him speaking at one of our events as an audience member," he says, "but none of us recall what he actually said. Generally, our events are attended by people in the homeland security community, and Hasan had a very legitimate reason to be there. He was a fellow at the Uniformed Services University of the Health Sciences."

Hasan was listed in the group’s report as one of roughly 300 "Task Force Event Participants."