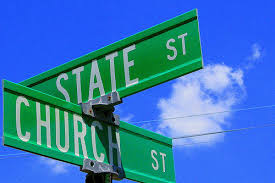 AMERICA may be a nation of believers, but when it comes to this country’s identity as a “Christian nation,” our beliefs are all over the map.

Just a few weeks ago, Public Policy Polling reported that 57 percent of Republicans favored officially making the United States a Christian nation. But in 2007, a survey by the First Amendment Center showed that 55 percent of Americans believed it already was one.

The confusion is understandable. For all our talk about separation of church and state, religious language has been written into our political culture in countless ways. It is inscribed in our pledge of patriotism, marked on our money, carved into the walls of our courts and our Capitol. Perhaps because it is everywhere, we assume it has been from the beginning.

But the founding fathers didn’t create the ceremonies and slogans that come to mind when we consider whether this is a Christian nation. Our grandfathers did.

Back in the 1930s, business leaders found themselves on the defensive. Their public prestige had plummeted with the Great Crash; their private businesses were under attack by Franklin D. Roosevelt’s New Deal from above and labor from below. To regain the upper hand, corporate leaders fought back on all fronts. They waged a figurative war in statehouses and, occasionally, a literal one in the streets; their campaigns extended from courts of law to the court of public opinion. But nothing worked particularly well until they began an inspired public relations offensive that cast capitalism as the handmaiden of Christianity.

The two had been described as soul mates before, but in this campaign they were wedded in pointed opposition to the “creeping socialism” of the New Deal. The federal government had never really factored into Americans’ thinking about the relationship between faith and free enterprise, mostly because it had never loomed that large over business interests. But now it cast a long and ominous shadow.

Accordingly, throughout the 1930s and ’40s, corporate leaders marketed a new ideology that combined elements of Christianity with an anti-federal libertarianism. Powerful business lobbies like the United States Chamber of Commerce and the National Association of Manufacturers led the way, promoting this ideology’s appeal in conferences and P.R. campaigns. Generous funding came from prominent businessmen, from household names like Harvey Firestone, Conrad Hilton, E. F. Hutton, Fred Maytag and Henry R. Luce to lesser-known leaders at U.S. Steel, General Motors and DuPont.

In a shrewd decision, these executives made clergymen their spokesmen. As Sun Oil’s J. Howard Pew noted, polls proved that ministers could mold public opinion more than any other profession. And so these businessmen worked to recruit clergy through private meetings and public appeals. Many answered the call, but three deserve special attention.

The Rev. James W. Fifield — known as “the 13th Apostle of Big Business” and “Saint Paul of the Prosperous” — emerged as an early evangelist for the cause. Preaching to pews of millionaires at the elite First Congregational Church in Los Angeles, Mr. Fifield said reading the Bible was “like eating fish — we take the bones out to enjoy the meat. All parts are not of equal value.” He dismissed New Testament warnings about the corrupting nature of wealth. Instead, he paired Christianity and capitalism against the New Deal’s “pagan statism.”

Through his national organization, Spiritual Mobilization, founded in 1935, Mr. Fifield promoted “freedom under God.” By the late 1940s, his group was spreading the gospel of faith and free enterprise in a mass-circulated monthly magazine and a weekly radio program that eventually aired on more than 800 stations nationwide. It even encouraged ministers to preach sermons on its themes in competitions for cash prizes. Liberals howled at the group’s conflation of God and greed; in 1948, the radical journalist Carey McWilliams denounced it in a withering exposé. But Mr. Fifield exploited such criticism to raise more funds and redouble his efforts.

Meanwhile, the Rev. Abraham Vereide advanced the Christian libertarian cause with a national network of prayer groups. After ministering to industrialists facing huge labor strikes in Seattle and San Francisco in the mid-1930s, Mr. Vereide began building prayer breakfast groups in cities across America to bring business and political elites together in common cause. “The big men and the real leaders in New York and Chicago,” he wrote his wife, “look up to me in an embarrassing way.” In Manhattan alone, James Cash Penney, I.B.M.’s Thomas Watson, Norman Vincent Peale and Mayor Fiorello H. La Guardia all sought audiences with him.

In 1942, Mr. Vereide’s influence spread to Washington. He persuaded the House and Senate to start weekly prayer meetings “in order that we might be a God-directed and God-controlled nation.” Mr. Vereide opened headquarters in Washington — “God’s Embassy,” he called it — and became a powerful force in its previously secular institutions. Among other activities, he held “dedication ceremonies” for several justices of the Supreme Court. “No country or civilization can last,” Justice Tom C. Clark announced at his 1949 consecration, “unless it is founded on Christian values.”

The most important clergyman for Christian libertarianism, though, was the Rev. Billy Graham. In his initial ministry, in the early 1950s, Mr. Graham supported corporate interests so zealously that a London paper called him “the Big Business evangelist.” The Garden of Eden, he informed revival attendees, was a paradise with “no union dues, no labor leaders, no snakes, no disease.” In the same spirit, he denounced all “government restrictions” in economic affairs, which he invariably attacked as “socialism.”

Dwight D. Eisenhower fulfilled that prediction. With Mr. Graham offering Scripture for Ike’s speeches, the Republican nominee campaigned in what he called a “great crusade for freedom.” His military record made the general a formidable candidate, but on the trail he emphasized spiritual issues over worldly concerns. As the journalist John Temple Graves observed: “America isn’t just a land of the free in Eisenhower’s conception. It is a land of freedom under God.” Elected in a landslide, Eisenhower told Mr. Graham that he had a mandate for a “spiritual renewal.”

Although Eisenhower relied on Christian libertarian groups in the campaign, he parted ways with their agenda once elected. The movement’s corporate sponsors had seen religious rhetoric as a way to dismantle the New Deal state. But the newly elected president thought that a fool’s errand. “Should any political party attempt to abolish Social Security, unemployment insurance, and eliminate labor laws and farm programs,” he noted privately, “you would not hear of that party again in our political history.” Unlike those who held public spirituality as a means to an end, Eisenhower embraced it as an end unto itself.

‘One Nation Under God’

Uncoupling the language of “freedom under God” from its Christian libertarian roots, Eisenhower erected a bigger revival tent, welcoming Jews and Catholics alongside Protestants, and Democrats as well as Republicans. Rallying the country, he advanced a revolutionary array of new religious ceremonies and slogans.

The first week of February 1953 set the dizzying pace: On Sunday morning, he was baptized; that night, he broadcast an Oval Office address for the American Legion’s “Back to God” campaign; on Thursday, he appeared with Mr. Vereide at the inaugural National Prayer Breakfast; on Friday, he instituted the first opening prayers at a cabinet meeting.

The rest of Washington consecrated itself, too. The Pentagon, State Department and other executive agencies quickly instituted prayer services of their own. In 1954, Congress added “under God” to the previously secular Pledge of Allegiance. It placed a similar slogan, “In God We Trust,” on postage that year and voted the following year to add it to paper money; in 1956, it became the nation’s official motto.

During these years, Americans were told, time and time again, not just that the country should be a Christian nation, but that it always had been one. They soon came to think of the United States as “one nation under God.” They’ve believed it ever since.

NOTE:This article was originally published in The New York Times Sunday Review on March 14, 2015 and is reprinted with permission of the author.

Kevin M. Kruse is a professor of history at Princeton and the author, most recently, of “One Nation Under God: How Corporate America Invented Christian America.”