Drug Policy Alliance Executive Director to Release Groundbreaking Book about Corruption, Drugs, and the Fight for Rights in Colombia 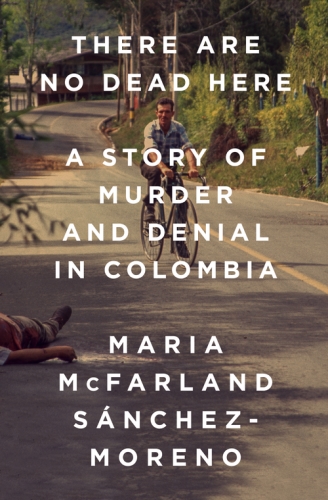 There Are No Dead Here: A Story of Murder and Denial in Colombia to be Released Tuesday, February 27

By:  Tony Newman and Tommy McDonald

While working in Colombia, the epicenter of the global war on cocaine, Drug Policy Alliance Executive Director Maria McFarland Sánchez-Moreno saw the devastation wrought by the drug war firsthand. Her fast-paced new nonfiction book – There Are No Dead Here: A Story of Murder and Denial in Colombia – offers lessons about the futility and devastating destruction that flows from the war on drugs, which US President Donald Trump and Attorney General Jeff Sessions are trying to ramp up.

Early revelations from the book, which focuses on three individuals’ struggle to expose the truth about organized crime’s influence on government, are already generating significant news in Colombia (read more here). One of the main characters, Iván Velásquez, has also gained prominence in recent years as the head of the UN Commission Against Impunity in Guatemala, which has conducted investigations of senior officials for corruption.

Colombia’s drug-fueled cycle of terror, corruption, and tragedy did not end with Pablo Escobar’s death in 1993. Just when Colombians were ready to move past the murderous legacy of the country’s cartels, a new, bloody chapter unfolded. In the late 1990s, right-wing paramilitary groups with close ties to the cocaine business carried out a violent expansion campaign, massacring, raping, and torturing thousands.

There Are No Dead Here is the harrowing story of three ordinary Colombians who risked everything to reveal the collusion between the new mafia and much of the country’s military and political establishment: Jesús María Valle, a human rights activist who was murdered for exposing a dark secret; Iván Velásquez, a quiet prosecutor who took up Valle’s cause and became an unlikely hero; and Ricardo Calderón, a dogged journalist from leading newsmagazine Semana who is still being targeted for his revelations. Their groundbreaking investigations landed a third of the country’s Congress in prison and fed new demands for justice and peace that Colombia’s leaders could not ignore.

Taking readers from the sweltering Medellín streets where criminal investigators were hunted by assassins, through the countryside where paramilitaries wiped out entire towns, and into the corridors of the presidential palace in Bogotá, There Are No Dead Here is an unforgettable portrait of the valiant men and women who dared to stand up to the tide of greed, rage, and bloodlust that threatened to engulf their country. The book shows how a few committed individuals can make a tremendous difference in dark times, offering reasons for hope in other countries going through challenging periods, including the US.

Maria McFarland Sánchez-Moreno is an activist, writer, and lawyer. She is the Executive Director of the Drug Policy Alliance, the leading organization in the US fighting to end the war on drugs in the United States and beyond. Previously, Maria held several positions at Human Rights Watch, including as the organization’s senior Americas researcher, covering Colombia and Peru, and as co-director of its US program. She grew up in Lima, Peru, and now lives in Brooklyn.

ADVANCE PRAISE FOR THERE ARE NO DEAD HERE

“A deeply informed account of Colombia’s decades long civil war and the many figures who profited from it… An admirable work of journalism in the interest of human rights.” – Kirkus Reviews

“The horrific violence in Colombia during the 1990s and 2000s is made painfully palpable in this account of three men who risked their lives to make public the atrocities committed by paramilitary forces and the Colombian government…. A necessarily grim narrative about the effects of government corruption in Colombia, with rays of hope to be found in Calderón’s, Valle’s, and Velásquez’s impressive achievements against formidable odds.” – Publishers Weekly

“In her masterful work, Maria McFarland Sanchez-Moreno unravels the intrigue, politics, and history between Colombia’s government and its paramilitaries. Through her precise reporting and elegant prose, There Are No Dead Here paints a vivid and harrowing portrait of three brave individuals who, despite death threats and great risk to themselves and their families, expose some of their country’s darkest secrets. This book is a must for anyone fascinated by Colombia’s complex history.” – Melissa del Bosque, author of Bloodlines

“A gripping and illuminating portrait of three far from ordinary Colombian whose courage, leadership, and perseverance continue to influence and inspire the fight for justice throughout Latin America. In a way, this story provides a roadmap of the hard, daring journey toward hope.” – Francisco Goldman, author of The Interior Circuit

“Maria McFarland Sánchez-Moreno has written an important, gripping account of how three individuals heroically risked their lives to fight terror and corruption in their country. The violent dramas and acts of human bravery that are told in There Are No Dead Here unfold in Colombia, but also offer lucid insights into the fragility of civil society-and of rule of law-anywhere. At a time when the boundaries between tyranny and democracy, truth and falsehood, become increasingly opaque, McFarland’s book offers a narrative that is unerring in its moral clarity.” – Jon Lee Anderson, author of Che Guevara: A Revolutionary Life