Recently, more and more Democrats have bemoaned what they consider Obama’s lack of leadership and his failure to speak out more vigorously and to denounce Wall Street and Republicans for their sins, past and present. These critics also complain that Obama has failed to explain plainly to ordinary people what Democrats have done and would like to do to solve our economic problems. In the back of these critics’ minds is the contrast with the role FDR played under what they consider were similar conditions during the Depression.  FDR’s "fireside chats” on the radio were his primary means by which he reached out to ordinary folk. These can be found at http://www.mhric.org. To quote one of these critics (Dean Westin, New York Times, Sunday Review, 8/7/11, p.1), FDR “explained how the crash had happened, and he minced no words about those who had caused it. He promised .. to put Americans directly to work .. and he made good on that promise.”

Now it is undeniable that Obama is a cautious centrist. All our Democratic Presidents since Johnson have been that. And it is also undeniable that Obama’s line that we should bridge party differences and get some of our problems solved that way is appealing to independents and helped Obama win the 2008 elections. But in the toxic partisan environment that has evolved since his election, more toxic, probably, than at any time since the pre-Civil War slavery debates, this line is out of place. That said, it is a dubious proposition that if Obama’s rhetoric and leadership had only been more partisan or forceful, more like FDR’s say, Democrats and our nation would today be in a better position. A comparison of the two Presidents’ situations when they came to office and the roles they played in their first year is instructive.

When FDR came to office in March 1933 the nation had been suffering from the Depression for three and a half years, the unemployment rate was 25%, many farmers had lost their farms, renters their apartments, and armies of homeless men rode the freight trains. On Inauguration Day a bank panic was sweeping the nation: 5,000 banks had already gone bankrupt and two thirds of the rest were closed under state proclaimed bank holidays; within a few days of taking office FDR closed the rest. Nobody had any doubts that the nation was in desperate trouble. Popular opinion placed much of the blame on the incumbent Hoover; his name became a byword for the suffering of the unemployed as in Hoovervilles (shantytowns of the unemployed) and Hoover blankets (their newspaper wraps) etc. The focus of the 1932 election was largely on the Depression naturally, though FDR offered few specific policies except to chide Hoover for running a deficit! (But that was the standard fare of all economists then.).

The landslide that brought FDR to office in 1933 also gave Democrats 72% of the House and 61% of the Senate, not quite a filibuster proof Senate in those days, but you had to actually keep talking then to filibuster, so it was a seldom used maneuver and never by Republicans in 1933.  And in every election after that, until 1942, Democrats achieved even greater majorities in both houses. In the famous First Hundred Days FDR got every bill he asked for plus bank insurance. Sometimes the bills passed in a few days. In 1933 we functioned like a European parliamentary democracy! And what a plethora of programs emerged from this Hundred Days legislative torrent:  relief for farmers, relief for industry and business (NIRA), loans for homeowners, bank deposit insurance (FDIC), relief for the unemployed by putting them directly to work in federal programs, such as the WPA and the Civilian Conservation Corps and TVA. The main and obvious focus was jobs, jobs, jobs. The people had given the leaders the power to act, they had acted quickly, and shortly after they acted the unemployment numbers began to fall steadily; by 1937 they were only half of the 1933 rate. Naturally FDR and the Democrats got all the credit, though things may not have been quite as simple as they seemed. By and large then, the people’s misery and panic gave FDR a totally compliant Congress and his main role that first year was to pick good advisers and with their help to devise new programs and then shovel these through Congress at breakneck speed. At the end of the First Hundred Days FDR explained what he had done in his second “Fireside Chat.” The bully pulpit is not what counted. Facts on the ground and energetic legislative response to them was key.

Obama’s situation was different in almost every way. At the beginning of 2008 the U.S. unemployment rate was 4.7%, by November it was 6.7%. So the economy was not a major election issue till September when Lehman Brothers went bankrupt followed by the Bush bailout of Wall Street (TARP). Health care, taxes and energy were the dominant domestic issues. Until then. At first the people and most of the leaders did not understand what had really happened to the economy at the end of 2008 and the beginning of 2009. The only thing they could understand was that first huge sums of money were being doled out, mainly to the institutions that were said to be the cause of the catastrophe followed by the equally large stimulus bill, the beneficiaries of which were vague and the purpose of which was probably very obscure to many people. At this juncture an Obama “Fireside Chat” explaining the stimulus bill would have been very helpful, but there was none. Only the auto companies’ bailout made obvious job saving sense. And the unemployment numbers hardly budged, and the same was true in 2010 and in 2011. The defense “we saved you from something much worse” was a hard sell to the ordinary person, even though it was true.

Then some started paying attention to the growing deficit. Almost nobody had pointed out to the people that the deficit kept growing by leaps and bounds under Bush, with tax cuts, two wars and so on. But with the new spending the numbers seemed suddenly frightening to some. Again another teaching moment was lost. And at that moment the Tea Party was born midwifed by talk show hosts. Greece and Portugal wobbled and the Tea Party message became persuasive to even larger numbers. A majority of people have not undergone the near the same suffering in the Great Recession as those who lived through the Great Depression. No Hoovervilles, no armies of hobos, no endless neighbors with their furniture on the sidewalk. The social safety net enacted since 1933 — deposit insurance, Medicare, Medicaid, social security, unemployment compensation, food stamps etc., etc. — by and large protected most people from the worst suffering. (O.K., 401k owners had a few bad moments.).  The Republican Party evolved into a ferociously partisan animal that had only one aim:  to prevent Obama from having any success, even if it wrecked the country in the process. And with the election of 2010 fueled by the deficit scare, they acquired the absolute power to do just that.

So Obama came to office just at the wrong moment, at the start of the Great Recession, with many in the public befuddled about what was going on and some of them blaming him for all the deficit spending, the very deficit spending that was so desperately needed. The Republican filibuster veto made it impossible to do significantly more stimulus spending in 2009 or 2010 (beyond the original bill) despite the obvious need to do so. The election of 2010 absolutely slammed the door on any further Administration attempts to revive the economy

Would a more progressive agenda or a more forceful use of the bully pulpit and attacks on Republicans have changed any of these developments? It is doubtful. It is true Obama could have pushed for a larger stimulus bill and a more effectively distributed one, as some urged, but the bill that actually passed, passed by only one vote. Obama and other Democrats could have done a much better job in explaining the stimulus bill to the public and that might have built better support for it and lessened hysteria about the deficit later. But all new administrations inevitably make mistakes. FDR certainly did. His show case NIRA is a case in point. The Clintons year long preparation of a health care bill is another.

In a perfect world, Obama would have gotten enough stimulus spending going and one year later unemployment numbers would have been steadily falling (as they did for FDR in 1933) and in 2010 Obama would therefore have retained control of Congress. And we would have lived happily ever after. 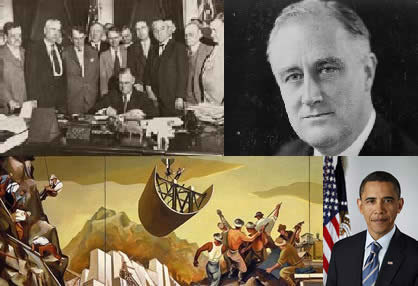 Walter Falk is a Park Forest resident and a Democrat.