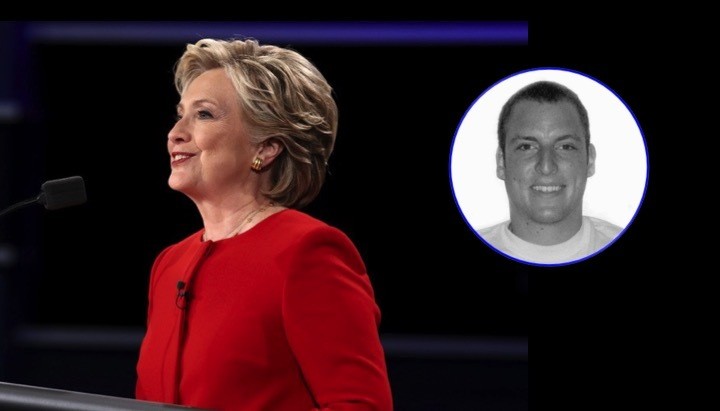 In his informative A Plus opinion piece titled: “A Grain of Saul: I Wrote That I Despised Hillary Clinton. Today, I Want To Publicly Take It Back,” Isaac Saul claimed he was a “Bernie Bro”—one of millions of millennials rooting hard for Senator Bernie Sanders. But Saul says, “After months of thought and research, I’ve come to enthusiastically support Clinton.” It wasn’t an easy road for the writer/blogger, who also contributes to Huffington Post. Tuesday after the first 2016 presidential debate, Saul admits on several sites and on Twitter that after months of thought and research, he’s come to “enthusiastically” support Clinton.

When Hillary Clinton became the presumptive Democratic nominee, I was distraught. Months before I had written about her, explaining that I despised her not for her gender — as some of her supporters accused — but for her hawkishness, her center-left policies, her husband’s crime bill that incarcerated so many people of color, her support for the Trans-Pacific Partnership, and her inability to get progressive on climate change policy.

I’ve spent almost every waking hour of every day following this election, reading about Hillary, Donald Trump, both parties’ platforms, and the under-qualified Libertarian and Green Party candidates running. During these months of obsessing over my choice, I’ve watched my position slowly shift. I’ve felt myself start advocating for Hillary more than advocating a vote against Trump, culminating in last night’s debate when she finally, totally, completely won me over.

Saul calls Donald Trump one of the most well-documented liars and scam artist businessmen to ever run for public office, yet, he says, we take Hillary Clinton for granted. He believes Hillary Clinton is the most qualified person to ever run for president and although she never served in the military, she was a secretary of state for four years, a U.S. senator for two terms, a first lady for eight years, which allowed her to see firsthand the challenges of being president.

He mentions Hillary Clinton’s work as a New York U.S. senator and how she helped rebuild the city after 9/11, garnering a $21 billion federal aid bill. “While Donald Trump bragged about his building now being the tallest in New York City, Clinton was fighting the Environmental Protection Agency to admit the air wasn’t safe to breathe.” Saul says that’s why Clinton has the support of so many 9/11 first responders and survivors—they remember how hard she worked to help them after the tragedy. But, Saul says, if you google “Clinton health bill 9/11” you will be barraged with nothing but stories about Hillary nearly fainting outside a 9/11 memorial service, rather than her compassion and accomplishments during 9/11.

Saul reminds us that in 1994, Hillary Clinton pushed for universal healthcare. “Then Democrats lost the House and they lost the Senate for the first time in 40 years. Democrats had essentially given up on health care reform, until First Lady Clinton helped the State Children’s Health Insurance Program (SCHIP).“ In his research, Saul adds that the same bill, even today, has resounding bipartisan support, and 8.4 million children—many of them low-income—are enrolled in its program.

As the largest ever televised audience watched Monday’s first presidential debate of 2016, Democratic presidential nominee Hillary Clinton stated while secretary of state she traveled to 112 countries, facilitating peace deals—and that impressed Saul. He believes Clinton clearly made mistakes by helping to “destabilize Libya, which led to the Benghazi diplomatic compound attack,” something Saul says he despised Hillary for, but “despite $7 million dollars spent on Benghazi investigations, 1,982 published pages of reports on Benghazi, 10 congressional committees participating in investigations, 3,194 questions asked in a public forum, Clinton and her administration have been found guilty of zero wrongdoing.” He says the Republican claim of her making a “stand down” call is bogus and even the family of the late ambassador Chris Stevens objects to the wrongful public blame placed on Hillary Clinton. But as many Americans have pointed out, Saul reminds his readers that the GOP somehow fails to talk about or mention that during George W. Bush’s presidency, there were 13 attacks on U.S. embassies that killed 60 people and “his career and record were not marred by these.”

Throughout her time in public service, Hillary Clinton has negotiated ceasefires in Israel, put the Lilly Ledbetter Pay Equity Act into law, authored the Pediatric Research Equity Act (which helped re-label drugs to keep millions of children safe), and she got the EU, Russia, China and other world powers to participate in the crippling sanctions on Iran that forced the country to negotiate its nuclear plan out of existence. All while enduring propaganda that thrust Benghazi and the Clinton Foundation — from which there’s also been no evidence of wrongdoing, in fact, quite the contrary — into the public’s mind.

Clinton has fought for the rights of women throughout the world “in places where that concept wasn’t even on the radar,” says Saul. “She’s pushed for paternity leave here in the United States, and became a symbol of women’s rights and women’s progress everywhere.”

Saul says for all for all of Secretary Clinton’s work, she endured Trump’s threats to mention her husband’s adultery despite the fact he’s had three marriages, and been accused of rape and adultery himself. She did call Trump out for calling women pigs and dogs, but Trump “lied about his position on the Iraq War, lied about his reasons for not releasing his tax returns, lied about his belief that climate change is a hoax created by the Chinese, lied about his feeling that pregnancy is an ‘inconvenience’ for businesses, lied during his defense of unconstitutional stop and frisk, lied that crime is getting worse in New York.” Still Fox political analyst Brit Hume criticized Hillary’s looks saying she was “not necessarily attractive.”

All this work, and what did Clinton get? She got an actual smug, young journalist named Isaac Saul writing about how I despised her, when I hardly knew the depth of her accomplishments, when I was clinging to the pipe dream of a Bernie Sanders presidency that may have never been in the cards, when my own father got ignored while he tried his best to talk some sense into me.

In his conclusion, Issac Saul apologized to Secretary Clinton for his former hateful stance against her.

Secretary Clinton, I’m sorry. And I retract my previous position of hatred and angst towards you. You have made mistakes, some of them grave, and some of them unforgivable. Unfortunately, that comes with decades of life in the public eye, pressure, and microphones in your face. But you have also accomplished far more in your life as a public servant than just about anyone that’s run for this office, and certainly far more than I ever will. When November rolls around, you’ll have my vote. And you’ll get it enthusiastically.

Issac Saul’s piece was stunning, not only because it was filled with fact after fact about Hillary Clinton’s accomplishments and career, but also because he shows us “what humble looks like” and his apology, though not necessary in the piece, is absolutely refreshing. You can read Issac Saul’s full piece here. Cheers to Saul for helping to set the record straight.