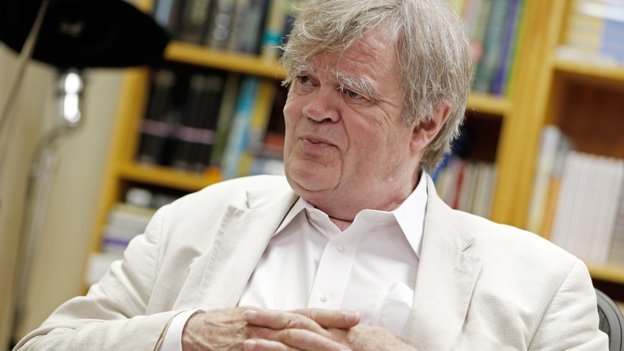 Garrison Keillor proves again that he is one of America’s sharpest, if a bit laid back, wits, tearing Pumpkin Hitler (hat-tip to EVSXRK’s daughter) a new one in today’s Washington Post. He begins with a bit of prairie inspired doggerel…

I know, it seems outrageous,

But it’s getting a lot of attention

On some very respectable Web pages —

Donald Trump was not born in Queens,

He was born in the Philippines,

In a hotel in downtown Manila.

Where his hair turned bright vanilla

Due to vitamin deficiencies.

There’s a lot more laughs in this poem, but you’ll have to visit the Post to read it all.

He continues with a very amusing anecdote:

“A week ago, a panhandler in Times Square sat holding a sign reading, “Give me a dollar or I’ll vote for Trump,” and people laughed and reached into their pockets. His bucket overflowed. He stuffed the bills into his jacket, and other panhandlers looked at him with admiration. The man could’ve sold franchises and retired to Palm Beach.”

As many of you know, I think Hils is about the weakest candidate we could have fielded, and as one who has lived underneath the Nixon, Reagan and Poppy Bush landslides, I am very afraid the country might make a huge mistake again. I’ll cast a sane vote, but forgive me if I must leave all the rah rah to you true believers. The nation has survives horrible leadership before, and as long as we have a few Keillors around we will again.

Don the Con will not be the end of us, though he might possibly draw it more and more nigh.

The astute Manhattanites, with their provident tips, know this, as, I suspect Keillor does.

He ends not with apocalyptic chorus but an old storyteller’s wondering bemusement.

“The success of Trump would show our children the exact value of education, which is: not that much. It would mean that fact-based journalism had very little bearing in America and a Manila-born Celanese child could aspire to the highest office in the land. So here’s a dollar in the beggar’s bucket. Good luck to democracy. Hang in there.”

Write us a few more before November, Garrison.