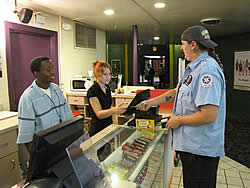 Yes, I have concerns about the Matanky Realty.

That is in answer to the many, many residents and business owners who have made comments to me, members of Village staff, and other board members, regarding the recent revelation that the former operator of the Holiday Star Theater was not at all who he claimed he was.

Park Forest works very hard to create an environment where businesses can open their doors and thrive after they’re open. While they’re getting their ship in order, our staff is patient. Some businesses as for time to fulfill some of our requirements, and, up to a point, staff will work with them, especially in a struggling economy. As opposed to the old anthem that we’re not "business-friendly" — a theme oft repeated by the previous operator of the Holiday Star — we work with businesses as they establish themselves, and continue to work with them after. We may have differences from time to time with respect to opinions on policy, but our goal is to maintain a positive atmosphere for businesses in Park Forest.

You better believe that this trustee will ask staff to consider how we deal with Matanky Realty.

Look. We have good staff. I’m sure they’re already doing that.

This is the second time Matanky Realty set up a business — and apparently vetted a business owner — with apparently little to no due diligence at all. I recently learned that the owner of Orchard Fresh had no grocery experience except that he used to sell seafood to grocery stores. That is contrary to everything the Matankys told us.

And now this, the Kenneth Arron fiasco, where the Matankys apparently did little to no due diligence again, and unleashed what many have called an apparent sociopath on our residents and their children.

For what it’s worth, the new manager of the Holiday Star is Park Forester Katie Zaret, and I feel good about that.

Staff at the Holiday Star seem to feel good as well.

Tessa LaCorte, who lives in Park Forest, was in charge of the shift Friday night at the Holiday Star. She has been an employee at the theater for almost four years, she says. Working for Kenny ‘a.k.a. Yochelson’ Arron was very "hectic and stressful, at times, and very nice, at times." LaCorte says.

How does she feel now, knowing what she knows now about the previous operator of the theater and the charges against him?

"I am really shocked, but a weight has been lifted off my shoulders," she says. "All of us knew that something wasn’t right about him, but we didn’t know it was to this extent."

Tessa admits that, while Arron ran the theater, business did get "a lot better." However, she admits that "we did lose customers" under Arron’s management.

Tessa is hoping that the customers they lost will come back.

As one of my Facebook friends and friend-in-real-life Michelle Johnson just suggested to me on Facebook, let’s save the drama for the movies, and move on.