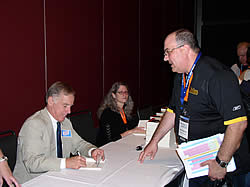 Governor Howard Dean answers questions while signing a copy of his book Friday at Netroots Nation in Pittsburgh. (Photo: ENEWSPF)

However, I want to share one quote that Dr. Dean shared with me when I had the opportunity to speak with him during the book signing that followed his presentation.

I stood in a rather long line, and Dr. Dean was extremely gracious with each person who came for his autograph in the book Howard Dean’s Prescription for Real Healthcare Reform: How We Can Achieve Affordable Medical Care for Every American and Make Our Jobs Safer

. When I finally reached the good doctor, I shook his hand and thanked him.

I then told him, if I had the chance during the large town hall meeting, I would have asked, “When are the Democrats going to grow some, stand up, and fight for health care reform?”

Dr. Dean responded by reiterating what he said to the larger group, “The Blue Dogs are Democrats,” he said. “They are Democrats.”

“They are Democrats,” Dean repeated. “But, you’re right. They do need to grow a pair.”

Those were his exact words.

In the town hall gathering, Dr. Dean told Netroots Nation that the “Conserva-Dems” have done us a favor in the health care reform debate. Dean noted that the Conserva-Dems are the only group at the table truly representing conservative Americans. The Republicans have removed themselves from the table, Dean said. They have chosen to not participate in the health care reform debate. The Conserva-Dems, or Blue Dogs, are the only truly conservative voice at the table.

That being said, Dean told Netroots Nation the Democrats have already compromised with conservatives in that single-payer health care is off the table.

“There will be no more compromise,” Dean said.

It’s time for the Democrats to fight for the change this country needs.

Stand up now, Dems! And grow a pair.