New Analysis: Voter Suppression Laws a Concern in 2018, Though Many States Looking to Expand Access 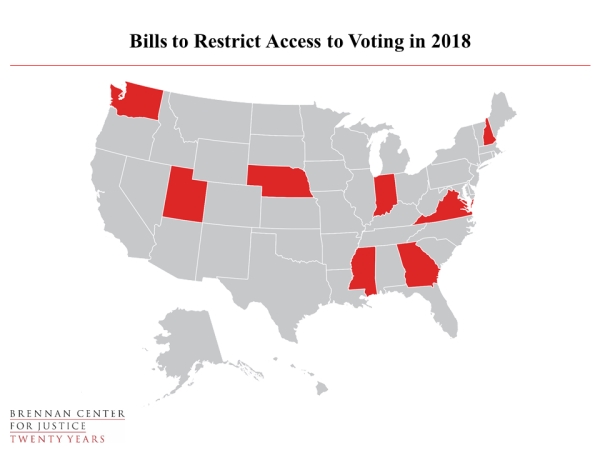 A first look at voting laws introduced in state legislatures across the country finds that voter suppression efforts continue to be a concern at the outset of a pivotal election year. The Trump administration is promoting a similar agenda at the national level. At the same time, lawmakers are also making a significant push to expand access to the polls, according to a new analysis by the Brennan Center for Justice at NYU School of Law.

In the first analysis of its kind in 2018, the Brennan Center’s Voting Laws Roundup shows that lawmakers in eight states have introduced at least 16 bills making it harder to vote, and 35 restrictive bills in 14 states have carried over from previous legislative sessions. If passed, the laws would increase restrictions on voter registration and limit early and absentee voting opportunities, among other changes.

Legislatures in 22 states are considering a combined total of at least 144 bills that would expand access to voting, and in 23 states and the District of Columbia lawmakers are considering 263 bills that carried over from the previous session. This includes legislation to automate the voter registration process, a reform with bipartisan backing that increases voter turnout, along with accuracy and security of voter rolls. There are also bills to expand opportunities to register, restore voting rights to people with past criminal convictions, reduce the burden of existing voter ID laws, and more.

“Our initial look at state laws makes it clear that the fight continues against voter suppression across the country,” said Myrna Pérez, deputy director of the Brennan Center’s Democracy Program. “But it’s extremely encouraging to see so many states looking to expand access to the polls and make a more inclusive democracy, especially in the face of a push for the opposite at the national level.”

New Hampshire is responsible for an outsize share of the restrictive legislation this year, including proposed bills aimed at disenfranchising students. Last year, the vice chair of President Trump’s “Election Integrity” Commission Kris Kobach claimed voter fraud was taking place in states like New Hampshire where a large number of voters held out-of-state IDs. Those comments were quickly refuted by New Hampshire’s chief election official and the Brennan Center, which noted that it’s perfectly legal and commonplace for out-of-state students to register in the jurisdiction where they go to school.

Virginia, on the other hand, is seeking to enact a broad-based, pro-voter agenda on the heels of progressive wins in last year’s state elections. So far, Virginia accounts for more than one-quarter of the expansive bills introduced this year.

The Brennan Center analysis also finds that six states have introduced bills related to election security issues, and four states are considering carry-over bills on the issue from last session. Brennan Center experts expect to see more legislation along these lines introduced in the coming months in response to the foreign interference concerns that surfaced during the 2016 campaign.

The Brennan Center will periodically update the Roundup as state legislature sessions continue.

For more information about the Brennan Center’s work on voting, click here.