Reading last week’s disturbing news accounts about the Midwestern arrest of nine alleged members of a Christian militia known as the Hutaree, a group whose members were reportedly planning to kill cops in order to spark a wider, armed revolt against the U.S. government, I noticed this nugget [emphasis added]:

FBI agents moved quickly against Hutaree because its members were planning an attack sometime in April, prosecutors said.

My hunch is the self-described "warriors" of the Hutaree probably circled April 19 on their calendars for any cop-killing fantasy they might have planned to pull off. Why April 19? That was the day, 17 years ago, when the FBI staged its final failed assault on cult leader David Koresh’s heavily armed compound in Waco, Texas. It was on April 19, 1993, following a 51-day siege, that Koresh’s fanatical followers, rather than surrendering to authorities, staged mass suicides (and, in some cases, executions) as the compound burned to the ground.

Precisely two years later, on April 19, 1995, right-wing zealot Timothy McVeigh commemorated the Waco inferno by declaring war on the federal government and blowing up his rented Ryder truck outside of the Alfred P. Murrah Federal Building in downtown Oklahoma City. McVeigh’s act of far-right radical terrorism sheared the north side off the Murrah Building, killing 168 people and injuring hundreds more. ("I reached the decision to go on the offensive — to put a check on government abuse of power," McVeigh later wrote.)

April 19 remains an almost mythical date among dedicated government haters. It’s a date that lives in infamy as proof of the dark consequences of when a tyrannical government (run by Democrats) turns on its own.

So yeah, as the Hutaree gun nuts allegedly plotted in the woods of Michigan on the best way to kill cops, pieced together their seditious plans to wage war on the U.S. government, and planned their upcoming confrontation with the Antichrist, I’m guessing the landmark militia day of April 19 loomed large.

For anyone who thought the dark, Waco-fueled chapter of domestic extremism in this country was behind us, the Hutaree arrests were a jarring reminder that, with the election of another Democratic president, the violent militia message is back.

And it’s stronger than ever.

Not only have the number of radical-right extremist groups exploded in the wake of President Obama’s election (more than 500 today, as compared to just 200 during the 1990s), but these militia members now have a proud sponsor in the person of Fox News’ Glenn Beck, who has done more than any other person to amplify and mainstream the movement’s hateful and foreboding anti-government message. Beck continues to give a voice, and national platform, to the same deranged, hard-core militia haters and self-style "patriots" who hounded the new, young Democratic president in the early 1990s in the wake of Waco.

On TV and the radio, Beck rarely bothers to mention the militia movement by name. Instead, he’s simply co-opted their rhetoric as his own. He’s acted as a crucial transmitter, warning about Obama fronting his own private "army," and urging followers to "start food storage."

Not to mention these previous militia moments:

The truth is that the daylight separating the radical, anti-government militia movement from self-styled mainstream conservatives is growing dimmer by the day. Like the fact-free Obama birthers, the militia remains a radical subset that today’s right wing refuses to part ways with. That sad fact was highlighted when scores of far-right media voices initially downplayed the Hutaree arrests last week, or even defended the militia members and — disturbingly reminiscent of Waco — cast the FBI and the federal government as the over-reaching bad guys.

And at Fox News, it’s not just Beck. The cable "news" channel’s militia-flavored message (beware gun-toting IRS agents!) has been as simple as it’s been relentless: Obama is destroying this country and he’s doing it intentionally. It’s not that people disagree with Obama and don’t like what they call his "liberal" policies as applied to the economy and health care reform, etc. Instead, the conflict is much more dire. Obama is not just misguided in this political and legislative agenda. Instead, Obama is the incarnation of evil (the Antichrist?), and his driving hatred for America, as well as for democracy, runs so deep that he ran for president in order to destroy the United States from within.

Right on cue last week, Rush Limbaugh, who serves as sort of a militia godfather theses days, issued this back-against-the-wall warning: "Our country is being overthrown from within."

That’s exactly what militias were saying about Clinton back in the 1990s, as historian David Bennett recently noted:

"I love my country but I fear my government," one bumper sticker proclaimed in the 1990s. A small North Carolina group of "Christian" constitutional literalists proposed to "resist the coming New World Order" by "removing treasonous politicians and corrupt judges." As today, they feared a liberal "tyrant" in the White House. At a gun rights rally in Michigan in 1995, a T-shirt called President Clinton a "Socialist-Marxist Comma-Nazi" …

Folks, we’re witnessing a militia rerun. Except this time, thanks to the likes of Beck and Fox News, the unwanted repeat is being broadcast nationwide.

Actually, today’s hysterical warnings are probably even more extreme than the last time a Democrat sat in the Oval Office. What’s disturbing is that instead of having to trade copies of The Turner Diaries, relying on grassroots fax networks, or traveling to gun shows to hear that kind of incendiary insurrectionist rhetoric (i.e. the president must be stopped!), haters can just turn on the highest-rated cable news channel.

In a way, I wonder why militiamen bother to form groups anymore if Fox News is willing to embrace and broadcast their fervent, anti-government New World Order rants on a daily basis? The militia flourished on the fringes in the 1990s, in part, because those on the far-right felt like their government-hating message was being ignored. But today it’s celebrated and broadcast nationally. Talkers like Beck have trumped the militia movement. They’ve completely co-opted the message and made the groups increasingly irrelevant as Fox News cuts out the middleman — the militia groups — and hijacks their insurrectionist, government-hating rhetoric.

Don’t think there’s a larger connection? Just look at the initial reaction when news broke about the Hutaree arrests. The knee-jerk response from some right-wing bloggers to either defend the militia members, or at least raise all kinds of doubts and partisan suspicions about the law enforcement raids, told us all we needed to know about where their true allegiances lie. Meaning, conservative voices immediately telegraphed their support from the persecuted militiamen and clearly suggested they were being used as pawns in an Obama government abuse of power.

Blogger Pamela Geller complained that the FBI raids were "nuts." Glenn Beck’s radio guest host Chris Baker decried the Hutaree arrests as "nothing more than attack on faith and free speech." And Washington Times columnist and frequent Fox News talker Monica Crowley likened Hutaree members to proud patriots, as she squarely placed the blame on the government for squelching the militia’s right to dissent:

The Democrats handle dissent by isolating it, smearing it and delegitimizing it in order to crush it. The warning should be clear: If you have small-government, traditional values, you may be considered by your own leadership to be an enemy of the state.

Keep in mind that both Geller and Crowley conveniently forgot to inform readers that the militia members had been arraigned on charges of plotting to kill cops. Apparently that fact no longer moves the needle in today’s right-wing media, which has severed its traditional ties with the law-and-order movement and instead today pledges its allegiance to whoever hates the government — and Democrats — the most.

Other conservative media voices rushed in to downplay the Hutaree news last week. At Lucianne Goldberg’s site, the wannabe cop killers were portrayed as "dimwits that [sic] couldn’t recognize a decent deer hunt." A New York Post editorial dismissed the armed Christian "warriors" as "a few guys in the woods with guns." And when not mocking the FBI’s raid and raising doubts about the need for arrests, the right-wing blog Confederate Yankee referred to the Hutaree not as an anti-government militia group, but as a religious "cult." (Nice try.)

Still others took a third path, suggesting politics were behind the militia crackdown. For instance, this was what Instapundit’s Glenn Reynolds instinctively wrote about the Hutaree raid:

Reynolds, along with other right-wing bloggers, suggested the arrests were politically motivated; that the raid was perhaps part of a government-wide conspiracy to spotlight conservatives in a negative light and stymie dissent. Rather than immediately denouncing anti-government extremists who may have been plotting to kill cops, Reynolds played up the partisan angle, suggesting the timing of the raid was a bit too "convenient." (Of course it was convenient, but not in the way Reynolds meant: The FBI claimed the extremists were poised to strike this month, so naturally that wanted to act before then.)

And oh, by the way, at Tea Party Patriots: Official Home of the American Tea Party Movement, this was the headline that immediately went up after the first bulletins about the militia raids were posted: 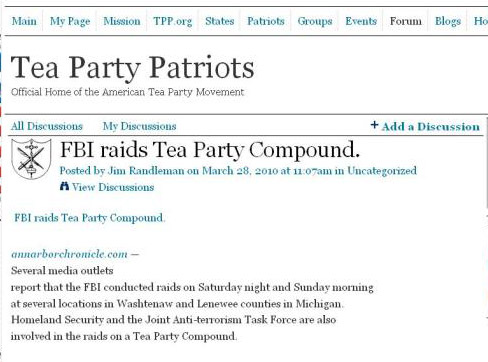 That’s right, some Tea Party leaders instinctively tagged the Hutaree compound as one of their own as it came under attack from federal law enforcement officials. And can you blame them? Today’s right-wing, Obama-hating rhetoric — as amplified by Glenn Beck and much of the GOP Noise Machine — is indistinguishable from the militia message.

That frightening kinship is obvious for everyone to see and hear.