Robert Reich Gets It: Why We Need A New Democratic Party 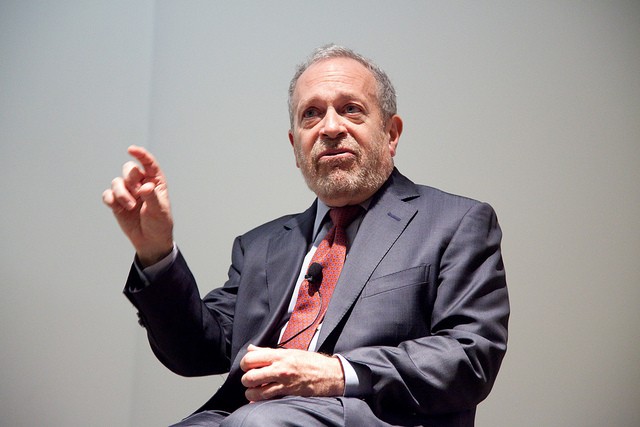 The Democratic Party as it is now constituted has become a giant fundraising machine, too often reflecting the goals and values of the moneyed interests. This must change. The election of 2016 has repudiated it. We need a people’s party – a party capable of organizing and mobilizing Americans in opposition to Donald Trump’s Republican party, which is about to take over all three branches of the U.S. government. We need a New Democratic Party that will fight against intolerance and widening inequality.

There is no denying that we have become a party of fundraisers rather than ideas. Surely it is not accidental that Nancy Pelosi, Charles Schumer and Hillary Clinton were in senior leadership positions? Each had each developed prodigious fund-raising operations and helped fund candidates across the country. These directed contributions and joint-fundraising helped them win allies among Democrats in other states. One perspective on this is that this is a unequivocally good thing. We need campaign funds.

But, does it really help if it shifts the structure of power to effective fund-raisers and their priorities? It should be clear to all that we cannot win or retain meaningful power without support across the country. There aren’t enough house and senate seats or electoral votes in California or New York to make it happen. And honestly, speaking as a proud New Yorker who lives in Manhattan, is an agenda set by my state, city and borough the best for the country as a whole? Personally, I’ve never thought so. Though we are urbane, we are parochial in our own way. And it is, E Pluribus Unum after all.

And it was not always this way. Think of Sam Rayburn for example.

What happened in America Tuesday should not be seen as a victory for hatefulness over decency. It is more accurately understood as a repudiation of the American power structure. […]

At the start of the 2016 election cycle, this power structure proclaimed Hillary Clinton and Jeb Bush shoo-ins for the nominations of the Democratic and Republican parties. After all, both of these individuals had deep bases of funders, well-established networks of political insiders, experienced political advisers and all the political name recognition any candidate could possibly want.

But a funny thing happened on the way to the White House. The presidency was won by Donald Trump, who made his fortune marketing office towers and casinos, and, more recently, starring in a popular reality-television program, and who has never held elective office or had anything to do with the Republican party.

He goes on to discuss how lop-sided the support was for Clinton, from both Democrats and Republicans. How Sanders’ candidacy was largely dismissed and Trump ignored. I would urge you to read the whole piece with an open mind. I’ll leave you with this:

Wealth, power and crony capitalism fit together. Americans know a takeover has occurred, and they blame the establishment for it.

The Democratic party once represented the working class. But over the last three decades the party has been taken over by Washington-based fundraisers, bundlers, analysts, and pollsters who have focused instead on raising campaign money from corporate and Wall Street executives and getting votes from upper middle-class households in “swing” suburbs.

One lesson here is that if we are to begin building a Democratic Party that works for all of America, those of us in big coastal metropolis will have to learn to listen to the rest of our country. And our response cannot be “I want to leave for Canada”.

PS. An edited version of Reich’s post seems to have been published by the Guardian as: Democrats once represented the working class. Not any more. But the full text on his blog reads better I think.

Share
Facebook
Twitter
Pinterest
WhatsApp
Email
Previous articleCalls to LGBT Suicide Hotlines Are Coming In at Five Times the Normal Rate This Week
Next articleIn and Around Park Forest for the Week of November 13, 2016