Washington, D.C.–(ENEWSPF)– In a note she posted to her Facebook page today, Sarah Palin mocked the AP’s use of 11 fact-checkers of her not-yet-released book, Going Rogue, writing: "We’ve heard 11 writers are engaged in this opposition research, er, "fact checking" research!" Hmm, do I hear echoes of Mark Steyn here? Palin — who stated that she "dedicated" the book to "Patriots" who "love the U.S.A. as much as I do" — continued:

So Palin is suggesting that the AP’s effort to fact-check her book — something a news organization has a journalistic duty to do if it’s going to report on it — means that it is somehow ignoring the stories of Khalid Shaikh Mohammed’s trial and Fort Hood shooter Nidal Hasan’s associations? Sorry, but… where’s the link?

In her post, Palin proclaims that she’ll "keep setting the record straight." Let’s do that: The AP has in fact used its "time and resources" to report on KSM’s trial (here, here, and here) and on Hasan’s alleged associations to terrorism (here, here, here).

But if the news media dare criticize any of her statements, will they be lumped in as "palling around with terrorists?" 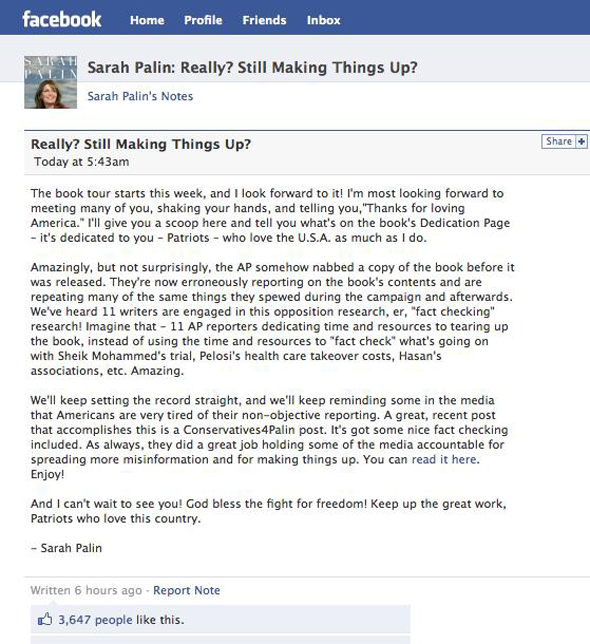