The release of an Associated Press poll last week that showed President Obama enjoying a healthy job approval rating of 53 percent didn’t generate much news beyond the wire service and produced even less commentary among the media’s chattering class. Then again, neither did another piece of polling news from January, which showed Obama basking in the glow of a 56 percent job approval rating.

The cold shoulder was expected, though. Why? It’s simple: the results didn’t fit the script.

Adopting the polar opposite narrative from the Bush era when pundits and reporters seemed obsessed with trying to boost the president’s standing, Beltway scribes today have made it plain that when it comes to Obama and polling, good news is no news.

Feeding off right-wing talking points, political journalists love to push the idea that Obama’s polling numbers are in the tank and that he’s fading fast. It’s all part of the preferred, CW narrative that his entire presidency is slipping away. (It must now be "save[d]," according to Newsweek.)

Does the White House wish Obama’s job approval rating was higher? I’m sure advisers do. Is there anything unusual in Obama’s approval number, other than the fact that it nearly doubles the rating his predecessor left office with? No, not really.

Indeed, the news media’s ongoing hand-wringing about Obama’s polling numbers and how he’s only around 50 percent (it’s "tepid" and cause for "worry") is rather odd considering former President Bush served nearly his entire second term with an approval rating below 50 percent and left the presidency with an almost incomprehensibly low 22 percent approval rating.

Also note that for the majority of Bush’s first year in office (i.e. up until September 11, 2001), his approval rating remained pretty much exactly where Obama’s has been since late last summer: hovering around 50 percent. But do you recall a media obsession about Bush’s super-soft poll numbers back during the spring and summer of 2001?

More queries: Has there been any dramatic shift in President Obama’s approval number since late last summer? No. (See below.) Has the press in recent months, busy echoing right-wing falsehoods, often pretended that there has been a sizable shift? Without question. (Rush Limbaugh, last month: "If Mr. Obama hasn’t noticed, his approval numbers are in a free fall.")

After weeks of frustrating delays and falling poll numbers, Mr. Obama decided to take what he could get, declare victory and claim momentum on some of the administration’s biggest priorities, even if the details did not always match the lofty vision that underlined them.

On Wednesday one year will have passed since President Obama’s inauguration. Much of the tidal wave of assessments has been negative: Falling poll numbers. Unfulfilled promises.

Amid declining poll numbers and political fortunes, President Barack Obama on Thursday tried to reconnect with the fickle state that helped put him in the White House and urged voters to keep the faith despite Florida’s withering recession.

The president’s falling poll numbers, ongoing backlash from Republicans, even some grumblings from Democrats. Might someone inside the White House bear most of the blame?

For months, Obama had been on the defensive, facing electoral setbacks, declining poll numbers, dissident Democrats and stories that highlighted the deal-making often needed to grind out legislation.

Everybody agrees that Obama’s poll numbers are falling, so it must be true, right?

If you look at Gallup’s weekly ratings for Obama, in late August 2009, he had a 50 percent approval rating. And for the most recently completed weekly tabulation from Gallup, Obama’s rating stands at 48 percent. That’s right, over a nearly seven-month period, the president’s approval rating, as measured by Gallup, dropped exactly 2 percentage points, which obviously falls within Gallup’s margin of error. That means you could accurately say that Obama’s job approval rating has remained unchanged over the last six-plus months. 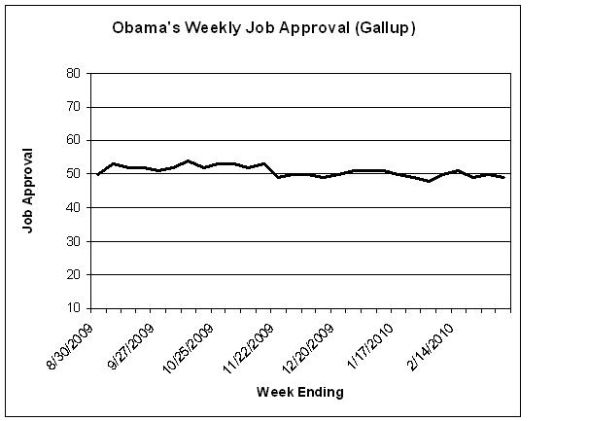 And it’s not just Gallup that has chronicled Obama’s rock-steady polling numbers. Take a look at the cumulative ratings posted daily at Real Clear Politics, which averages eight different polls (including Rasmussen’s outlier tabulations) to come up with Obama’s composite job approval rating.

Here are some of the data points from RCP:

And for the most recent, month-long snapshot, between February 17 and March 14, RCP pegged Obama’s approval rating at 49 percent. So, much like Gallup, RCP has found that, since last August, Obama’s job approval rating has basically shifted downward just a few points, or again, within the typical survey margin of error.

Given those figures, I’ll ask again: Why is the press so eager to push this storyline about Obama’s "falling poll numbers"? Where is the proof to back it up? And since when does a 1-3 point movement in any direction qualify as news? It’s absurd.

By the way, if for some reason Obama’s approval rating does significantly sag this month, or next, that won’t somehow vindicate the previously erroneous coverage. Because the press has been claiming for the last several months that Obama’s poll numbers have already fallen noticeable (which they have not), not that they’re going to.

The media fixation on a barely there approval decline is especially bizarre when you consider how blasé the same press corps was during the Bush administration when the president often suffered gargantuan job approval declines. For instance, between December 2003 and May 2004, Bush’s job approval plunged 17 points, according to Gallup. But it’s hard to find much proof that the Beltway press corps was obsessed with Bush’s "falling poll numbers" at the time.

But back to Obama. From September 1, 2009, to March 1, 2010, there was literally no change in Obama’s approval rating. So why is the press so anxious to push the "falling poll numbers" meme? And is that why, when the White House did receive rays of good polling news during those months, the press seemed so anxious to look away?

Was it because when it comes to covering this Democratic White House, good news is no news?

At times it sure seems that way.

Back in January when The Washington Post reported on its latest political survey, the newspaper forgot to mention that Obama’s job approval had gone up that month. Not a single reference to that fact was made in the article, which did set aside plenty of space to pile on the doom-and-gloom rhetoric:

A year into his presidency, President Obama faces a polarized nation and souring public assessments of his efforts to change Washington, according to a new Washington Post-ABC News poll.

Nearly half of all Americans say Obama is not delivering on his major campaign promises, and a narrow majority have just some or no confidence that he will make the right decisions for the country’s future.

By the way, this was the Post‘s headline:

According to the Post, there was "growing disappointment" over Obama. Yet the Post itself forgot to report that his approval rating had gone up that month.

The same was true over at CNN.com in December 2009. Writing up the results of its latest poll, CNN not only didn’t think the news hook was that Obama’s approval rating had gone up 6 points in just two weeks, but the CNN article didn’t even reference that finding until two-thirds of the way into the piece.

And then there was the AP in November 2009. Same drill. Its polling at the time showed Obama enjoying a robust 54 percent approval rating. So where was that information buried? In the article’s ninth paragraph, after the AP painted an almost comically bleak picture of the political landscape Obama faced at the time.

And again, it’s not just that the press has often misstated the facts about Obama’s polling numbers. It’s that this is the same Beltway press corps that often treated Obama’s Republican predecessor in the exact opposite way, often itching to suggest that Bush’s horrendous polling numbers were on the mend and spending years denying Bush’s glaring job approval ratings collapse.

For instance, in January 2006, Time magazine’s Mike Allen announced that Bush had "found his voice" and that relieved White House aides "were smiling again" after a rocky 2005. Of course, within months, Bush’s approval rating fell to new all-time lows.

In April of that year, Katie Couric, then with NBC News, was asking Tim Russert if the White House could "breath[e] a sigh of relief" because Bush’s latest approval rating had only fallen to 36 percent. In the end, Bush’s phantom rebound never materialized and he left office as the least popular president in modern American history.

And yet for most of his eight years in office, the press seemed to have a gut feeling that Americans just liked Bush. And today, their instinct tells them that Americans don’t really approve of Obama.

Here’s an idea: Maybe journalists should simply report what Americans tell pollsters and stop trying to concoct a storyline.