Fact: The breathless claim that Fox News’ ratings recently spiked thanks to the White House’s public critique is bogus hype — hype that Fox News and the Beltway press have relentlessly pushed.

No matter how many times reporters and pundits made the claim, a detailed analysis of Nielsen ratings numbers clearly indicates that in the two weeks after the White House in mid-October sparked a media controversy by claiming Rupert Murdoch’s channel was not a legitimate news organization, Fox News’ ratings did not soar or go "through the roof." In fact, not only did Fox News’ overall ratings not soar, they experienced no significant increase at all. Instead, in the two weeks following the initial verbal jousts with the White House, Fox News’ total day ratings virtually flatlined.

Think about it. The unfolding controversy, which gobbled up untold hours and pages of news coverage as the Beltway press treated the dispute like a major news event (even though news consumers couldn’t care less), and the hubbub barely moved the ratings needle one inch in Fox News’ favor.

Another example of the Beltway press not letting the facts get in the way of a good story? It sure looks that way. In this case, we saw nearly universal agreement among media elites that the White House decision to publicly call out Fox News was monumentally dumb, thin-skinned, short-sighted, and uncivil. (Paging the etiquette police!)

Everyone said so. Therefore pundits were certain that Fox News’ ratings were way up and that Obama and his aides had made a huge tactical blunder. The ratings angle simply provided statistical ammunition for what the Beltway press corps already knew to be the truth: Fact-checking Fox News, in the immortal words of The Washington Post‘s CW-loving Sally Quinn, was "absolutely crazy."

Except it turns out none of that was true. There was no viewer stampede toward Fox News.

How did the story line about Fox News’ (phantom) ratings surge morph into cemented fact? First, pundits simply announced the ratings bonanza was on the way. They knew it had to be the case, so they simply said so, over and over and over. (See below.) Then some misleading ratings reports began to surface that seemed to confirm the spike. For instance, on October 26, the Los Angeles Times, going with ratings data provided by Fox News, reported: "In the two weeks since aides to President Obama took after the [cable channel’s] coverage, the audience has been 8% larger than the previous two weeks."

Not only did that report make a specific ratings claim, but it also set the parameters for measuring the supposed Fox News success — its ratings for the two weeks prior to the eruption of the White House controversy, (i.e. September 28-October 11) compared to the two weeks that followed (i.e. October 12-25). Again and again we saw that model used to support the ratings "spike" claims.

On October 27, BusinessInsider.com used the same framework and posted this blaring headline: "Fox News Ratings Soar After Snub From Obama." Like the Los Angeles Times, Business Insider adopted the two-weeks-before-vs.-the-two-weeks-after model to conclude that in the two weeks prior, the cabler averaged 1.2 million viewers vs. 1.3 million in the two weeks after the political controversy erupted.

From there, it’s no exaggeration to suggest that virtually every high-traffic conservative blog on the Internet linked to the report and mocked the White House for helping spike Fox News’ numbers. And like the bogus right-wing claim from last month that 2 million anti-Obama protesters gathered in Washington, D.C., on September 12 (the number was only off by 1.9 million), the dubious claim that Fox News’ ratings had soared became the beloved gospel.

Late that same day on October 26, industry ratings site TVbytheNumbers.com also posted an item, which seemed to confirm the ratings spike: "Fox News Ratings Up During White House ‘War.’ " Like Business Insider, TVbytheNumbers, citing Nielsen data*, reported: "Fox News’ total day adults 25-54 demo ratings and average viewership are up 14% and 9% respectively during the two weeks of ‘war’ vs. the previous two weeks of ‘peace.’ " And like Business Insider, TVbytheNumbers reported that prior to the controversy, Fox News averaged 1.2 million viewers; after the controversy, 1.3 million were tuning in.

The next day, the Chicago Tribune‘s political blog, The Swamp, parroted the same stat: "FOX viewership is up 9 percent and 14 percent among adults since the feud with the White House started."

Done deal, right? Wrong, because those numbers didn’t add up. Or more specifically, those numbers did not reflect Fox News’ ratings two weeks prior to the controversy and two weeks after. Instead, the numbers represented a cherry-picked attempt to create the illusion of a ratings spike for Fox News.

And here’s how. As I mentioned, the two weeks prior to the White House dispute cover the dates from September 28-October 11. The two weeks after that cover the dates from October 12-October 25. But the tabulation used to come up with the 9 percent ratings gain (i.e. 1.2 million vs. 1.3 million) only measured Fox News’ post-controversy ratings from October 12-October 23, which meant it was a 14-day comparison vs. a 12-day comparison. And which two days were left off the tabulation? Saturday, October 24 and Sunday, October 25. Traditionally, Saturday and Sunday, of course, are the two lowest-rated days of the cable news week.

What happened when you included October 24 and October 25 in the tabulation to make a true two-week-vs.-two-week comparison? Suddenly, that 9 percent gain in overall viewers evaporated into a barely-there 2 percent blip, while that 14 percent increase among viewers 25-54 shrunk to a much more modest 7 percent bump. 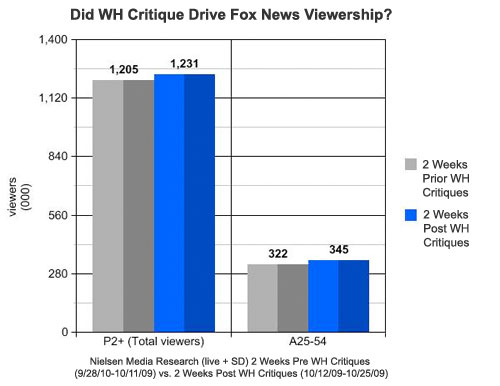 And by the way, in the world of cable news, a tiny 2 percent bump in viewership over a relatively short span of two weeks is utterly irrelevant and signifies nothing more than the normal up-and-down viewing patterns that are part of the business. For instance, on October 15, Fox News averaged 1.5 million viewers for the day. The next day, the total audience slipped to 1.3 million, a drop of more than 10 percent. Did that mean Fox News’ ratings "plunged"? Hardly, which is why the channel’s 2 percent gain in the two weeks following its battle with the White House didn’t signify much of anything.

The same was true of the relatively modest 7 percent gain among the more targeted 25-54 demo. Because that audience group is much smaller (roughly 330,000 viewers each day as compared to the larger pool of 1.2 million), a 7 percent increase or decrease is unexceptional. Again, between October 1 and October 2, Fox News’ total day 25-54 demo decreased from 415,000 to 320,000 viewers — a drop of almost 25 percent. The smaller 25-54 demo often fluctuates like that.

And besides, if you listened to media elite pundits, Fox News ratings weren’t inching up incrementally thanks to the White House. Pundits didn’t cautiously claim that because of the White House critique, Fox News’ ratings among the niche 25-54 demo were going to increase modestly.

This is what happens when claustrophobic uniformity takes over among the Beltway chattering class. This is what happened when the media elites agreed that it was nuts for the White House to fact-check Fox News, and they were sure that the administration’s carping sent the cable channel’s ratings "through the roof." With so little original thought involved in the robotic repetition of the anointed Beltway truth, nobody bothered to checks the facts.

The chattering class wanted to claim Fox News’ ratings were going up, up, up. They wanted to suggest that the White House critique had massively backfired. But now we know that’s fiction. So when are the pundits going to start posting their retractions?

*For the record, the Nielsen ratings company never issued any findings regarding Fox News ratings in the wake of the White House dispute, according to company spokeswoman Alana Johnson, who responded to my email inquiry. Lots of third parties subscribe to the Nielsen data and can put together their own interpretations of the ratings and attribute that analysis to Nielsen numbers, which is what happened in this case. But in terms of Fox News, Nielsen itself never made any kind of official finding about the cable channel’s recent ratings in regards to the public controversy.

*Michael Wolff writes from Newser, not TV Newser, as originally stated. I regret the error.