Unemployment Holds at 4.1 Percent in March, 2018, Wage Growth Picks Up 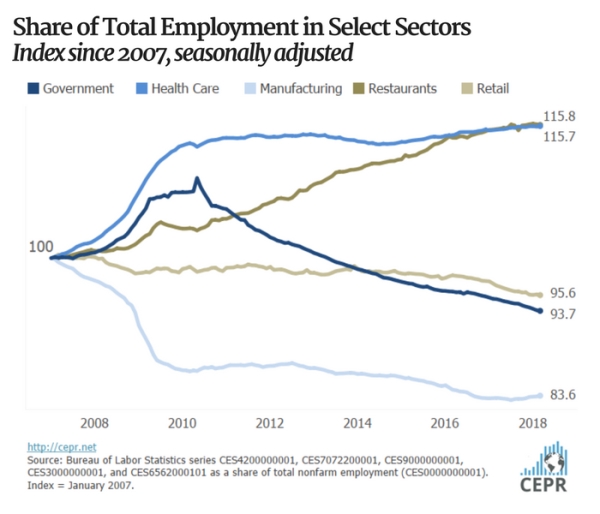 The percentage of unemployment due to voluntary quits hit its highest level since 2001.

The Bureau of Labor Statistics reported that the economy added 103,000 jobs in March, however it revised down the prior two-month job growth by a total of 50,000 jobs, bringing the three-month average to 202,000. The unemployment rate was unchanged at 4.1 percent. The employment-to-population ratio (EPOP) was also unchanged at 60.4 percent.

It’s likely that unusually cold weather across the Northeast dampened job growth in March just as unusually warm weather may have boosted growth in February. More weather sensitive sectors such as construction, retail, and restaurants were especially weak, with construction losing 15,000 jobs in the month, retail 4,400 and restaurant employment unchanged. Restaurants added an average of 19,200 jobs a month over the last year.

Manufacturing added 22,000 jobs, its eighth consecutive monthly increase. All the job growth was in durable goods, as employment in non-durables was unchanged. This has been the pattern throughout the recovery as growth in the durable sector has hugely outpaced growth in the non-durable sector, even though employment in both is still far below pre-recession levels. The apparel and textile sectors, which disproportionately employ women, continue to lose jobs. Employment in these sectors is down by 12,200 (3.5 percent) over the last year.

Other big job gainers in the month were health care (22,400 jobs), professional and technical services (18,900), and wholesale trade and social services, both of which added 11,400 jobs in March. All are roughly in line with their recent growth rates.

Over the recovery the big gainers in employment shares have been restaurants and health care, with both seeing a rise in their share of total employment of just under 16.0 percent. Retail’s share of employment has fallen by roughly 4.5 percent, while the government share has fallen by more than 6.0 percent. The big loser, however, has been manufacturing, which has seen its share fall by more than 16.0 percent since 2007. Its share has been rising modestly since the low hit last July.

There is some evidence of accelerating wage growth in the March data. While the average hourly wage increased by just 2.7 percent year-over-year, the annualized rate comparing the average for the last three months (January, February, and March) with the prior three months (October, November, and December), was 3.2 percent. This suggests that workers may finally be getting back some of the share of income they lost to profits in the Great Recession.

Most of the data in the household survey is consistent with a continued strengthening of the labor market. There was a small dip of 0.1 percentage points in the EPOP for prime-age workers (ages 25–54) from the peak of the recovery in February. This drop was entirely due to the drop in the rate for men. The EPOPs for men and women are both well above year-ago levels: 1.0 percentage point higher for men and 0.4 percentage points higher for women. It is likely that these will rise further if the job market remains strong.

In an especially good sign, the percentage of unemployment due to people who voluntarily quit their jobs jumped to 13.1 percent in March, the highest level since May of 2001. This statistic is a good measure of workers’ confidence in the labor market, since it means that they are prepared to leave a job even before they have a new one lined up. Until this month, the quit rate had been unusually low (mostly under 11.0 percent), given the levels of unemployment we were seeing. The March level is more consistent with an unemployment rate near 4.0 percent. It is important to note the number is erratic, so it could be reversed, in part or in whole, in future months.

The duration measures of unemployment were mixed. A sharp fall in the average duration reported in February was reversed in March, while both the median duration and the share of long-term unemployed fell.

After accounting for weather, it is likely that job growth remains in a range of 180,000 to 200,000. At this pace, workers will continue to be pulled into the labor force and wage growth may strengthen in the months ahead.

Dean Baker is a Senior Economist at the Center for Economic and Policy Research (CEPR) in Washington, DC. He is the Author of Getting Back to Full Employment: A Better Bargain for Working People among other books.