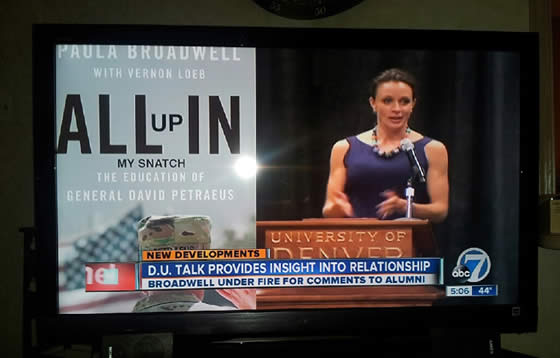 From The Raw Story:

An ABC News affiliate in Denver says that while attempting to report on the resignation of former CIA Director David Petraeus, the station mistakenly aired a photoshopped version of his mistress’ book with the raunchy title “All Up In My Snatch.”

KMGH-TV producer Deb Stanley told Raw Story that the wrong book cover had been “mistakenly picked up off the Internet” and aired during their 5 p.m. broadcast on Monday. Instead of displaying the actual book cover of Paula Broadwell’s Petraeus biography, “All In,” KMGH-TV aired the parody cover, “All Up In My Snatch.”