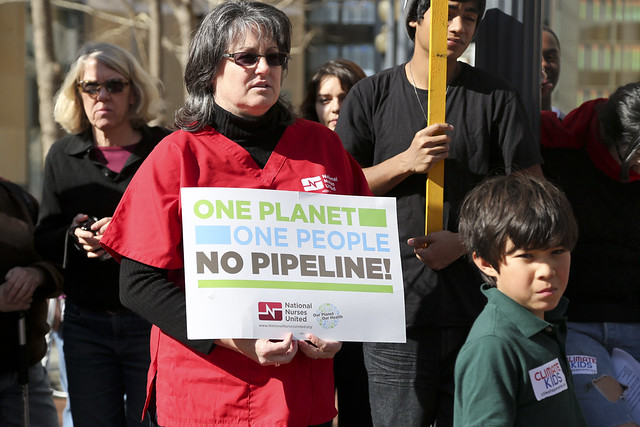 Silver Spring, Maryland–(ENEWSPF)–January 6, 2015.  Citing continuing concerns about the threat to public health, National Nurses United today urged the Obama Administration to formally reject the permit for the proposed Keystone XL pipeline, not just rely on a possible veto of legislation expected to pass in the new Congress.

“While the composition of Congress has changed, the facts about Keystone have not,” said NNU Co-President Karen Higgins, RN, co-president of National Nurses United.

“From the extraction, transport and production of tar sands oil to the compelling evidence that the pipeline will accelerate the harmful effects of the climate crisis, the Keystone XL pipeline remains a significant danger to pubic health and safety.

“The President should tell Congress in no uncertain terms that he will veto any pro-Keystone bill that comes to his desk. But the best way to conclude this debate once and for all is for President Obama to not just veto new legislation, but to formally reject the KXL permit in the name of the national security of our people,” said Higgins.

NNU also called on Congressional opponents of the pipeline to refrain from attaching amendments to KXL “in hopes of mitigating the disastrous consequences of pipeline approval.”

“As the President and State Department have both acknowledged, at best KXL would create only 35 longterm jobs. This project is not a jobs bill, it is an unwarranted gift to big oil and the fossil fuel industry that will jeopardize the health of our patients, our communities, and our planet,” Higgins said.

“Tar sands refining has been linked to ailments of the nervous and respiratory systems. Dust storms in Chicago and Detroit off piles of petcoke, the byproduct of tar sands refining, have coated homes and areas where children play and raised concerns about heart attacks, decreased lung function, asthma, already at epidemic levels in America, and premature death.

“This may only be the first glimpse of what is at stake if Keystone is approved.”

Climate experts have also warned that the pipeline would greatly accelerate the process of climate change, which Higgins called a “health catastrophe.”

A recent report on “The Climate Crisis and the Global Threat to Human Health” by the Cornell Global Labor Institute in collaboration with NNU documents the widespread ways in which climate change adversely affects human health.

These include vector-borne diseases, from malaria to Ebola, extreme weather events that lead to death, injuries, toxic contamination, and the spread of infectious diseases and mental health disorders, food shortages and nutrition insecurity linked to droughts and flooding, respiratory and pulmonary diseases linked to wildfires, and heat related strokes.

“The only way to confront climate crisis is to fight it head on. Stopping Keystone by rejecting the permit now is a critical step,” Higgins said.